Size750mL Proof123 (61.5% ABV)
When Nàdurra Peated Cask Finish was introduced as a new member of The Glenlivet family, this bottle was the first peat influenced expression from the distillery in over a century.
Notify me when this product is back in stock. 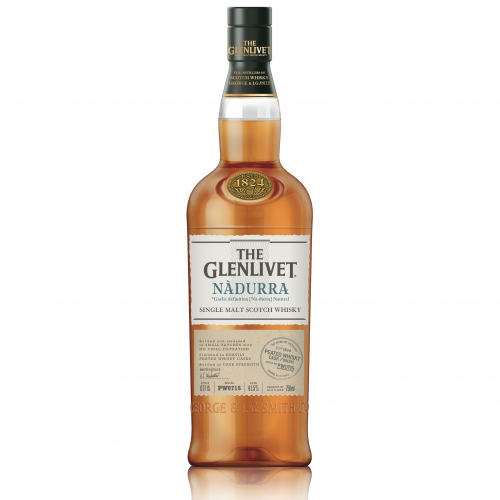 The Glenlivet Nàdurra Peated Whisky Cask Finish is the first peat influenced expression from the distillery in over a century. Created with respect for traditional methods this whisky is produced in small batches and bottled at natural cask strength without chill-filtration. Finished in casks that have previously held heavily peated Scotch, The Glenlivet’s classic, smooth and fruity house style has been enriched with gentle, aromatic smoky notes.

As a result, The Glenlivet Nàdurra Peated Whisky Cask Finish, has a nose of soft red apples mixed with citrus zest and aromatic smoke. The palate consists of a rich tangy marmalade followed by creamy vanilla toffee and a distinct toasted smokiness. The finish is long and complex with spicy notes layered by subtler smoky notes.

“Nàdurra, for me, perfectly captures the original passion behind the distillery and our commitment to crafting unique flavors. It’s a wonderfully warm whisky, with swirls of vanilla cream and subtle traces of tangy smoke which is definitely a new territory for The Glenlivet and one I hope Caskers Members will enjoy!” Alan Winchester, Master Distiller of The Glenlivet

A burst of soft red apples on the nose mixed with citrus zest and aromatic smoke. On the palate there is a rich tangy marmalade followed by creamy vanilla toffee and a distinct toasted smokiness. The finish is long and complex with spicy notes layered by subtler smoky notes.