Rating:
93%
(1)
Matured in French Limousin Oak for a limited time, this spicy single malt earned Gold at the San Francisco World Spirits Competition in both 2011 and 2012.
$74.99
Add to Wish List

During the early 19th century, illegal distilleries were commonplace throughout the Speyside region of Scotland. In 1823, however, Alexander Gordon pushed the Excise Act of 1823 through Parliament. The Excise Act allowed illegal distillers throughout Scotland to apply for and obtain licenses to legally distill spirits. In 1824, a businessman named George Smith applied for one of the first licenses in the Speyside region of Scotland and opened the doors to The Glenlivet Distillery. For nearly two centuries, The Glenlivet Distillery has been producing the “single malt whisky that started it all.”

Following distillation, a portion of The Glenlivet 15 Year Old Single Malt Scotch Whisky is matured in French Oak for a limited time. French Limousin Oak, which is cut in the Dordogne region of France, is typically reserved for the maturation of fine wines and cognac — when used to age whisky, the low density profile of the wood allows the spirit to penetrate deep into the wood, lending the whisky a signature spiciness.

As a result, The Glenlivet 15 Year Old Single Malt Scotch Whisky has an intense golden color and aromas of butter, caramel and whipped cream. On the palate, the whisky is slightly fruity, with notes of baked apples and cinnamon spice leading to a finish accented by almonds, nutmeg and pie crust.

Intense golden color and aromas of butter, caramel and whipped cream. On the palate, the whisky is slightly fruity, with notes of baked apples and cinnamon spice leading to a finish accented by almonds, nutmeg and pie crust. 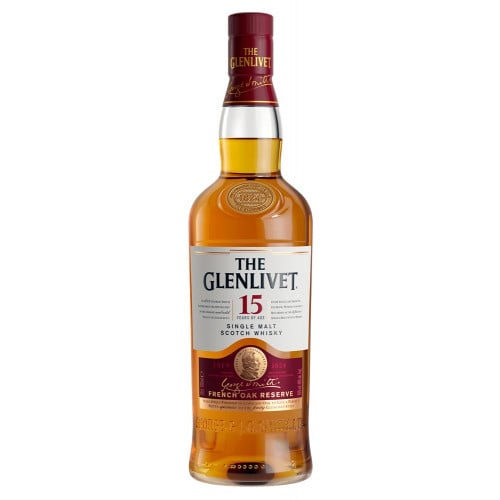