Learn more
Size750mL Proof120.4 (60.2% ABV) - May vary *Please note that the ABV of this bottle may vary
Bottled at cask strength, this whisky was matured exclusively in ex-Oloroso sherry casks from Jerez, Spain.
Notify me when this product is back in stock. 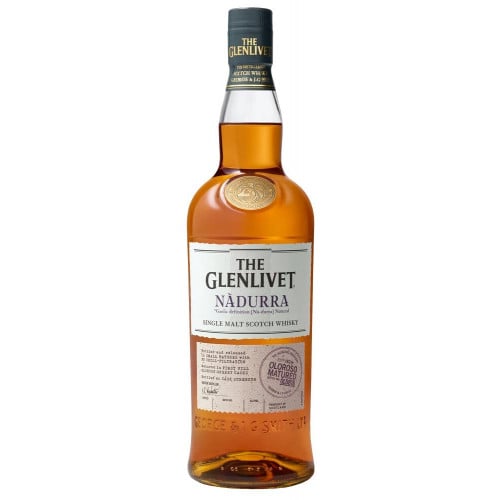 The Glenlivet Single Malt Whisky is made using barley sourced from Crisp Maltings, Portgordon (Portgordon is a village in Moray, Scotland). After the barley has been malted and mashed, it is fermented in wooden washbacks for approximately two days. The wooden washbacks used by Glenlivet are more difficult and expensive to maintain as compared to the stainless steel washbacks used by most Scottish distilleries, but impart a distinctive, floral quality to the whisky.

After the barley has been fermented, it is distilled twice — first through Glenlivet's wash still, and then again through Glenlivet's spirits still. Originally designed by George Smith, the copper-pot stills have a unique, lantern-like shape, which encourages contact between the whisky and the copper. The copper strips the whisky of any impurities it may have, and provides for a lighter and more pure flavor profile.

Following distillation, The Glenlivet Nàdurra Oloroso Matured Single Malt Scotch Whisky is matured exclusively in first fill Oloroso sherry oak casks from the Jerez region of Spain. These casks are some of the most highly prized and sought after casks used by whisky makers, and impart distinctive notes of dried fruits, raisins, apricots, orange marmalade and dark chocolate to the whisky. After maturing in the casks, the whisky is bottled at cask strength without the use of chill filtration (Nàdurra means "natural" in Gaelic).

Pick up a bottle of this glorious Glenlivet today!