Once the barley has been fermented, the wash is distilled twice, first through Dalmore Distillery's copper-pot wash stills and then again through its copper-pot spirit stills. The wash stills have an unusually flat-top, while the spirit stills are equipped with cold water jackets. This unusual equipment — the water jackets rinse cold water near the top of the still — makes it difficult for the lighter elements of the whisky to pass through the still, and ultimately results in a more opulent and rich whisky.

Following distillation, the Dalmore Cigar Malt Reserve Scotch Whisky is fractionated and matured in three different types of casks. While a portion of the whisky is allowed to mature in used bourbon casks, another portion is matured in three decade-old Matusalem Oloroso Sherry butts, and the remainder is matured in casks that were previously used to mature Cabernet Sauvignon from the Saint-Estèphe appellation of Bordeaux. After the whisky has matured in the various casks for 10 to 15 years, Richard Paterson — Dalmore Distillery's third generation master-distiller — fuses the whisky together in order to create Dalmore Distillery Cigar Malt Reserve (Paterson is such an expert that his nose was insured for £7 million).

The Dalmore Cigar Malt Reserve Scotch Whisky has soft notes of cinnamon, figs, honey and orange zest, which are complemented by notes of stone fruits (particularly plums), cherries, apricots and raspberries. It scored a Double Gold in the 2019 International Spirits Challenge.

The Dalmore Cigar Malt Reserve Scotch Whisky represents a lush and opulent expression from one of the oldest and most prestigious Scottish distilleries.

Aroma of cinnamon vanilla and red fruits. Tropical fruits, banana, toffee and vanilla on the palate, followed by an orangy finished with a hint of crushed spices. 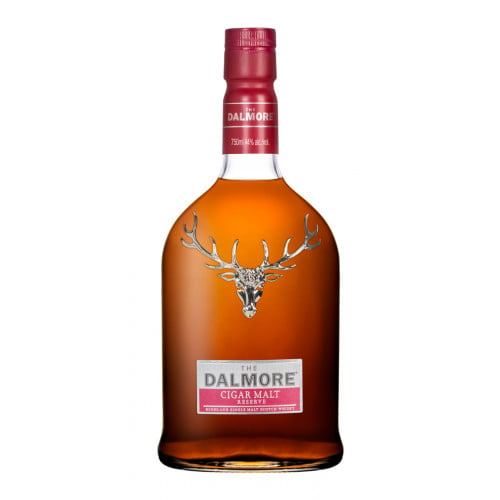