Size750mL Proof111 (55.5% ABV)
This cask-strength single malt Scotch was matured in refill American oak and finished in red wine casks. The 14-year-old whisky is a powerful, fruity, and floral expression that's bottled at 111 proof.
Notify me when this product is back in stock. 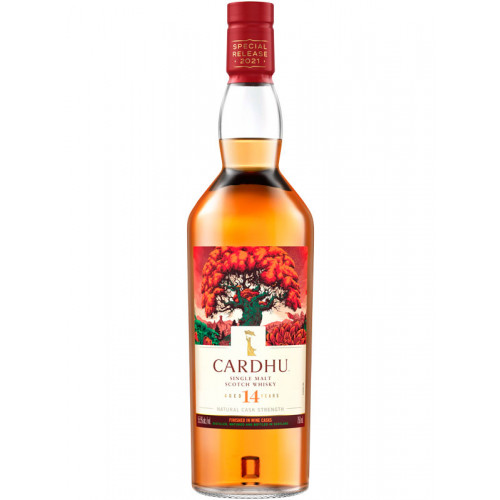 During the early 19th century, the British Crown was still recovering from the exorbitant costs of the Napoleonic Wars, and Parliament was tasked with the responsibility of finding new sources of revenue that could support Britain's European hegemony. In 1823, Parliament passed the Excise Act, which required illegal distilleries throughout Scotland to apply for licensure and levied taxes on any spirits they distilled.

Just one year after the passage of the Excise Act, John and Helen Cummings founded the Cardhu Distillery in the Speyside region of Scotland. In an effort to avoid the taxes levied on distilled spirits by the Excise Act, Helen would disguise the mashing and fermenting of grains at the distillery as bread-making. In addition, while the tax collectors dispatched by the Crown enjoyed the tea and crumpets that she prepared, Helen would raise a red flag on the roof of her barn in order to warn her neighbors that Excise Officers had descended upon the region.

By 1872, the Cummings had passed the distillery on to their daughter, Elizabeth, and by the turn of the century, Cardhu Distillery had earned a reputation as one of Scotland's finest producers of single malt Scotch whisky. At the same time, Cardhu whisky became an increasingly critical component of Johnnie Walker blended whiskies.

Diageo's 2021 Special Releases Collection follows the theme of hidden stories within iconic distilleries, connected via mythical creatures depicted on the bottles. The Cardhu 14-year-old Special Release Single Malt was matured in refill American oak and finished in red wine casks before being bottled at cask strength. The 111-proof single malt Scotch is powerful, fruity, and floral with notes of grape, lychee, heather honey, and a smooth & creamy texture.

It's a fruity and floral expression with white grape and lychee aromas on the nose along with freshly-picked meadow flowers. The sweet palate has red berries and heather honey, culminating in a warm finish with a touch of white pepper.