Learn more
Size750mL Proof80 (40% ABV)
Only 24,000 bottles of this whisky, which was made to replicate the original 1963 whisky released in the United States, are available worldwide.
Notify me when this product is back in stock.

This product is available in: RI Unfortunately, we can't ship to PO Boxes and APO addresses. 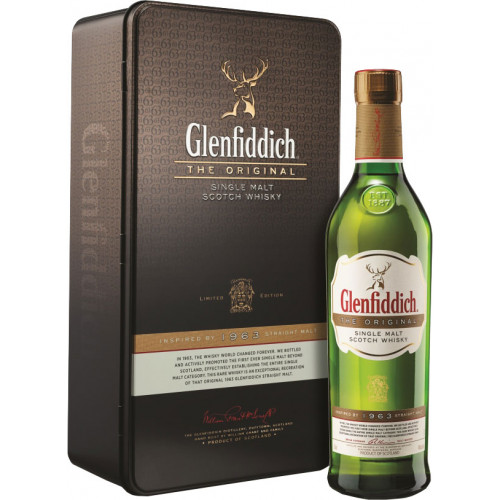 In 1886, William Grant, along with the help of his nine children and a single stone mason, began construction of the Glenfiddich Distillery, situated in the Speyside region of Scotland. After a year of hard labor, the first drop of whisky fell from the distillery’s copper-pot stills on Christmas Day 1887. Today, Grant’s passion, determination and pioneering spirit continue to guide Glenfiddich Distillery, which is stewarded by the fifth generation of the Grant family.

Glenfiddich The Original 1963 Single Malt Scotch Whisky was inspired by the first Glenfiddich Single Malt that the distillery released in the United States in 1963. The 1963 single malt — then called straight malt — helped establish single malt scotch whisky as a distinct category in the United States. The bottles in this feature are produced using the same recipe and specifications as the 1963 whisky, and are labeled to pay homage to the original whisky.

“When you go to the distillery and see all of the amazing things we’ve done, one of the things we haven’t really talked about a lot is the role Glenfiddich played in creating the single malt category,” said Andy Nash, Scotch Whisky category director for William Grant & Sons USA. “Many talk about it and give us the credit for that, and it’s great to actually go back into our archives and see all of those elements and recreate them for a new audience now. It’s really showing the pioneering that Glenfiddich was doing back in the 60’s and that we’re continuing today.”

Glenfiddich The Original as a fresh and fruity aroma, with hints of oak, spices, buttered biscuits citrus and caramel on the palate. The finish is mellow yet complex, with layers of vanilla, toffee and butterscotch mingled together.

Only 24,000 bottles of this whisky are available worldwide. Pick up a bottle today!

Fresh and fruity aroma, with hints of oak, spices, buttered biscuits citrus and caramel on the palate. Finish is mellow yet complex, with layers of vanilla, toffee and butterscotch mingled together.