Size750mL Proof80 (40% ABV)
Sitting atop the range of Dewar's "double aged" blends is this 25-year-old-expression that has had every liquid mature at least 25 years before being finished in Royal Brackla casks for an extra smooth and creamy profile. 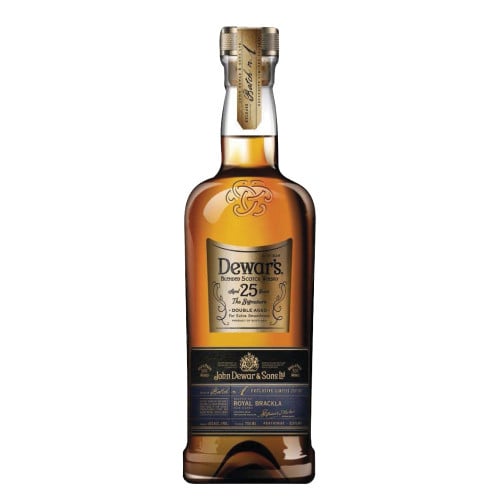 Atop the "double aged" range sits the 25-year-old expression, the oldest and rarest in their permanent lineup. It's aged at least 25 years in oak casks. It is then blended and finished in casks that used to hold Royal Brackla, letting the flavors and aromas marry. The finished whisky has a smooth, creamy, and rich profile with honey and nutty notes and is bottled at 80 proof.

There are honey, floral, apple, pear, and oak notes on the nose with cinnamon and clove to spice it up. These notes carry over to the creamy palate, where vanilla and toffee join along with citrus zest and a peppery spice. Finishes with lasting honey, oak, and soft smoky notes.