The Macallan A Night On Earth: In Scotland

Size750mL Proof80 (40% ABV)
This festive seasonal release was inspired by Scotland's Hogmanay festivities and the fire rituals that are common in New Year celebrations. Matured in a combination of American & European oak sherry seasoned casks as well as ex-bourbon barrels, you'll find a distinct shortbread note in the profile. 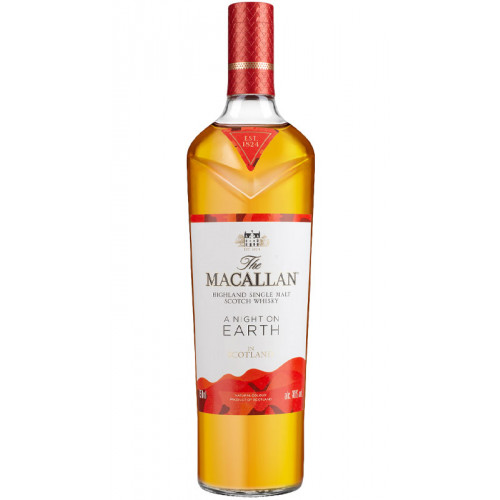 About The Macallan A Night On Earth: In Scotland

Crafted by Lead Whisky Maker Sarah Burgess, A Night On Earth In Scotland is a limited-edition single malt that is inspired by Scotland's Hogmanay ("the last day of the old year") festivities. Shortbread usually plays a part in these traditions, meaning you'll find shortbread notes in the profile. The whisky was matured in a combination of American & European oak sherry seasoned casks as well as ex-bourbon barrels. The expression had The Macallan collaborate with illustrator Erica Dorn, known for her work in the films of Wes Anderson. Dorn contributed the design that is inspired by fire rituals, common in New Year celebrations.

Get your bottle of this festive limited-edition single malt today!

The single malt opens with rich and creamy aromas of vanilla, butter, biscuits, caramelized apple, plum, and nuts. The palate is sweet, soft, and rich with vanilla, toasted marshmallows, dried orange, fig, and cinnamon, culminating in a medium finish with butterscotch and shortbread notes.