Caskers Rewards members earn up to 4 store points back when buying this bottle.
Size750mL Proof91.6 (45.8% ABV)
This whisky is distilled on the shores of the Isle of Skye, one of the most remote and rugged areas of Scotland and a fitting tribute to House Greyjoy.
Notify me when this product is back in stock. 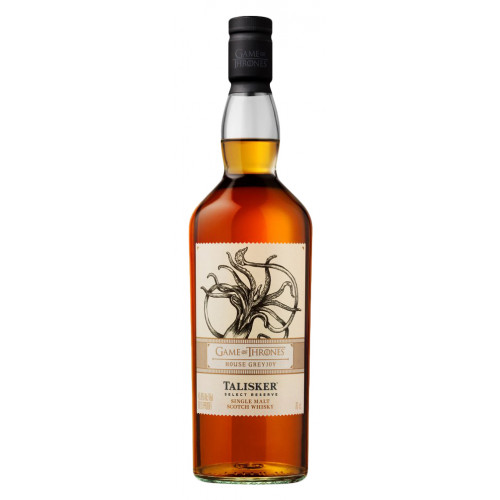 Talisker Single Malt Whisky is made from malted barley sourced from the Muir of Ord, a village in Highland, Scotland. The barley is lightly peated to approximately 18 phenol parts per million, which contributes a slightly smoky flavor profile to the whisky. Once the barley has been malted and peated, it is mashed using soft water drawn from one of the 14 underground springs that rise from Hawk Hill — Talisker has been using the same water source since it was founded nearly two centuries ago.

The smash-hit series Game of Thrones has teamed up with spirits giant Diageo, to create eight rare Scotches inspired by the royal Houses of Westeros. In honor of the Emmy-winning show, each bottle tells the tale of each of the Seven Kingdoms. The iconic whiskies serve as must-have collectibles for Game of Thrones and whisky adorers.

Representing House Greyjoy is a Talisker single malt truly fitting for House Greyjoy. This whisky is distilled on the shores of the Isle of Skye, one of the most remote and rugged areas of Scotland. This rare limited edition is perfect for Scotch lovers and Game of Thrones fans alike.

Dry Sichuan pepper smoke and dark chocolate aromas on the nose. The palate has a distinctive maritime quality enhanced by caramel notes, spice, smoke, and fruit. The finish is lingering and complex with a leathery character.