Size750mL Proof91.6 (45.8% ABV)
This whisky was named the Highlands Single Malt of the Year by Whisky Advocate in 2013.
Notify me when this product is back in stock. 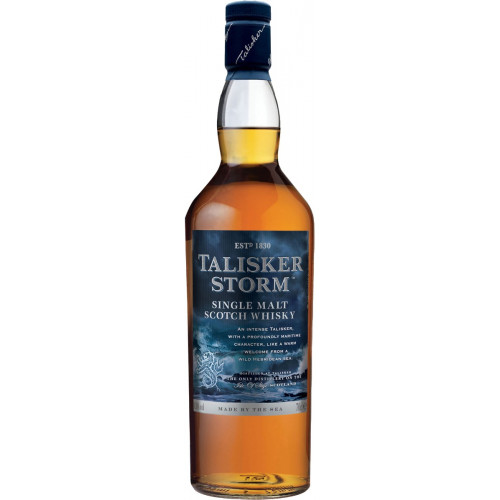 Talisker Single Malt Whisky is made from malted barley sourced from the Muir of Ord, a village in Highland, Scotland. The barley is lightly peated to approximately 18 phenol parts per million, which contributes a slightly smoky flavor profile to the whisky. Once the barley has been malted and peated, it is mashed using soft water drawn from one of the 14 underground springs that rise from Hawk Hill — Talisker has been using the same water source since it was founded nearly two centuries ago. "I'm restless at heart so you'll find me poking my nose into the mash tun at all hours," says Mark Lochhead, Talisker's distillery manager.

Talisker Storm Single Malt Scotch Whisky takes its name from the harsh conditions that the Isle of Skye often experiences. "We were inspired to craft an expression as unique as the dramatic terrain of the island from where it hails," says Jim Beveridge, Talisker's master blender. The whisky is crafted by marrying together both rejuvenated and refill casks of different ages to enhance the vibrant intensity that is the signature of Talisker Distillery. This approach allows Beveridge to create "one vibrant dram."

Talisker Storm has an aroma of spicy oak, smoked beef, black pepper and honey. The aroma gives way to notes of mellow and rich caramel on the palate that are followed by warming notes of pepper and cloves. The finish is smooth and lasting, with touches of smoke, pepper and salt.

Talisker Storm was named the Highlands Single Malt of the Year on December 20, 2013, by Whisky Advocate.

Aroma of spicy oak, smoked beef, black pepper and honey. Notes of mellow and rich caramel on the palate that are followed by warming notes of pepper and cloves. Finish is smooth and lasting, with touches of smoke, pepper and salt.