This product is available in: DC, FL, NY, TX Unfortunately, we can't ship to PO Boxes and APO addresses.

Size375mL Proof92 (46% ABV)
This distinctive Dewar’s is blended from some of the rarest whiskies in Scotland, before being finished in sherry casks.

This product is available in: DC, FL, NY, TX Unfortunately, we can't ship to PO Boxes and APO addresses. 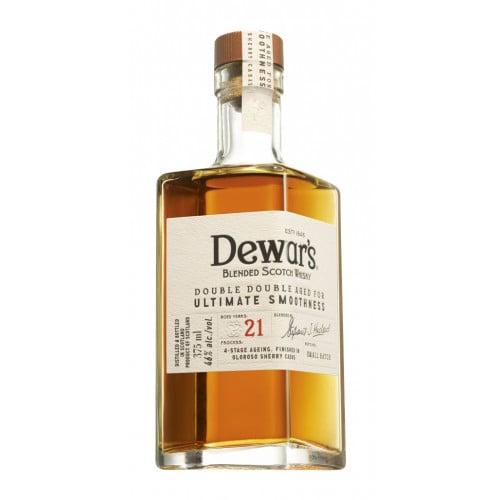 In 1846, John Dewar began blending the finest whisky he could source in Scotland and bottling it with his own name on the label. Within a decade, Dewar was supplying whisky to bars and hotels throughout Scotland. By the turn of the century, the brand had expanded to become one of the best selling whiskies in the world and today, remains the best selling Scotch whisky in the United States.

Dewar's Signature Blended Scotch Whisky — the flagship whisky of John Dewar & Sons Co. — is crafted by blending together "the rarest of rare whiskies from across Scotland." The backbone of the whisky is a 27 year-old single malt whisky that is crafted at Aberfeldy Distillery, according to master blender Thomas Aitken. Once the 27 year-old is married together with other whiskies, the resulting blend is allowed to rest again in oak casks. This secondary maturation process "is a marriage made in heaven — ensuring our whiskies are even smoother and creamier," says Aitken.

Signature sherried notes on the nose, with an intense citrus oil and nuttiness that gives way to cracked black pepper and a touch of savory bacon and grassy notes. The palate is sweet and bursting with flavor, followed by a smooth finish.