Learn more
Size750mL Proof92 (46% ABV) *Please note that the ABV of this bottle may vary
Crafted from a blend of Speyside single malts, this whisky earned a score of 92 points at the Ultimate Spirits Challenge.
Notify me when this product is back in stock. 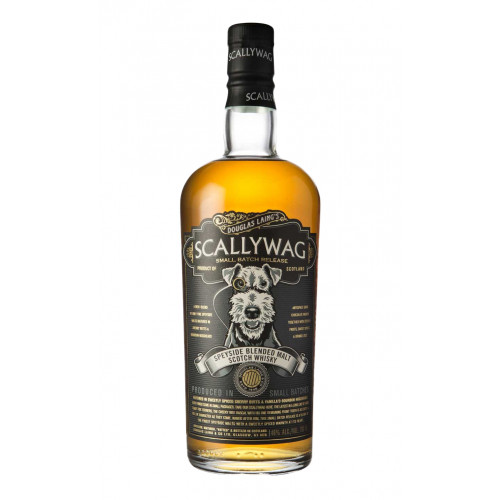 During the 19th century, illegal distilleries were commonplace throughout Scotland. In response, Parliament passed the Whisky Excise Act of 1823, which permitted distilleries in Scotland to distill whisky in exchange for a license that cost £10 and subjected each liter of whisky produced to a special tax. Within decades, Scotch whisky became one of the country's greatest exports.

Scallywag Speyside Blended Malt Small Batch Release is crafted by blending together single malt scotch whiskies distilled at some of the finest Speyside distilleries in Scotland, including Mortlach, Macallan and Glenrothes. The Speyside region is known for producing slightly oily whiskies, that are lighter yet more sweet on the palate. Once the Speyside whiskies used to craft Scallywag are identified, they ware married together in Spanish oak casks that were previously used to mature sherry. Then, the whisky is non-chill filtered before being brought to proof and bottled by hand.

As a result, Scallywag Speyside Malt Scotch Whisky Small Batch Release has a soft yet sweet aroma, with hints of plantains, ginger, saltines and candied oranges. The aroma gives way to notes of nutmeg, toffee, cereal, honey and cinnamon on the palate, and leads to a finish accented by touches of red fruits, dark chocolate, tobacco and vanilla.

Scallywag Speyside Malt Scotch Whisky Small Batch Release was named the Best Blended Malt Whisky at the 2014 World Whiskies Design Awards Competition, and earned the Silver Medal at the International Wine & Spirit Competition. In addition, it earned the Double Gold Medal at the San Francisco World Spirits Competition and earned a score of 92 points at the Ultimate Spirits Challenge. Pick up a bottle today!

Soft yet sweet aroma, with hints of plantains, ginger, saltines and candied oranges. Notes of nutmeg, toffee, cereal, honey and cinnamon on the palate. Finish accented by touches of red fruits, dark chocolate, tobacco and vanilla.