Learn more
Size750mL Proof80 (40% ABV) *Please note that the ABV of this bottle may vary
This innovative single malt from Glenfiddich is aged using a special Solera Vatting technique, which is unique to whisky maturation. A 2014/2015 Gold winner at The Scotch Whisky Masters (The Spirits Business Awards). 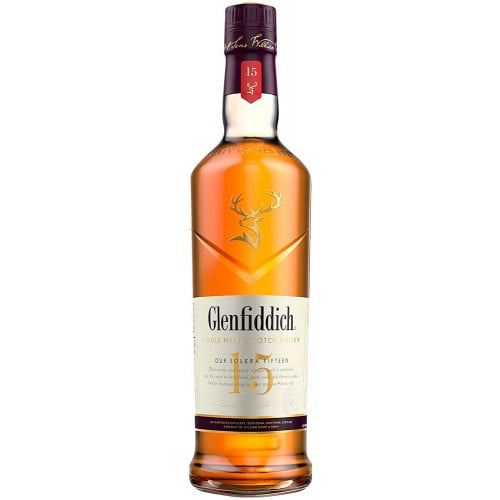 Glenfiddich Single Malt Scotch is made exclusively from malted barley, which is milled and mashed with water sourced from Robbie Dhu spring. The crystal clear spring water, which is bottled directly at the source, is incredibly pure — the distillery purchased 1,200 acres around the spring decades ago in order to protect its unique water supply. After the barley has been mashed, it is fermented in wooden fermentation tanks made of Douglas Fir.

While wooden fermentation tanks are more expensive and difficult to maintain as compared to stainless steel tanks, they absorb a portion of the heat generated during fermentation, and thus, enable a slower and longer fermentation process. Following fermentation, the wash is twice-distilled through Glenfiddich's copper-pot stills (the distillery employs a craftsman onsite to tend to the stills, which are unique in shape and size) before the heart of the distillate is cut and prepared for maturation.

The Glenfiddich Scotch Single Malt 15 Year Unique Solera Reserve, is matured using a very special process. The unique Solera method involves a long line of casks, each year a portion of whisky is moved, in sequential order down a long line of casks. A portion of the first is moved to the second, second to third, and it continues in this order. This mixture is accumulated at the last cask, which is then vatted. This technique usually allows a unique intermix of older and younger whiskies.

This Glenfiddich single malt is very distinct in that it is aged in a mixture of casks including: ex-bourbon, ex-sherry, and new virgin American oak. The whisky in these casks are matured for 15 years, in an Oregon Pine Solera Vat, which contains the sequential mixture of age statement whiskies. This technique is unique to whisky maturation, and is usually used in the Spanish production of Madeira and Sherry wines. This special single malt is rife with notes of sweet vanilla and sherried notes. It contains whisky older than 15 years of age, but its youngest whisky is 15-years-old.

Pick up a bottle of this innovative single malt today!

On the nose are notes of vanilla, honey, heather, and dark berry. On the palate are distinct silky, full bodied notes of sherry oak and cinnamon. The finish is rich, sweet, and warm.