Size750mL Proof80 (40% ABV)
Winner of the NY, Ultimate Spirit Challenge Chairman’s Recommendation 2015. This whisky was dubbed ‘extraordinary’ with a score of 96/100.
Notify me when this product is back in stock. 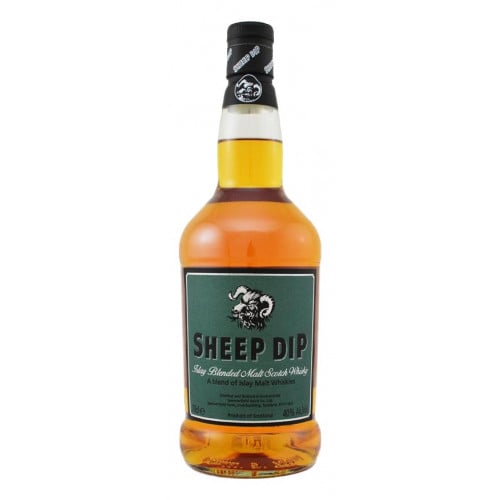 British farmers have long used an insecticide, referred to in layman’s terms as Sheep Dip, to delouse their sheep prior to shearing. This liquid both cleanses the sheep of parasites and preserves the sheep’s wool, and is commonplace on West Country farms. As farmers became enterprising with their grains and began distilling their own, homemade whisky, they cleverly hid the substance in barrels labeled “SD” — short for Sheep Dip — to avoid paying taxes on the whisky. Eventually, even farmer’s wholesalers began selling the whisky, billing it as Sheep Dip. Unfortunately, not all of the farmer’s purchasing the whisky had flocks of sheep, and thus ultimately the scheme was uncovered by the British government.

Sheep Dip Malt Whisky is made on the fully-operational Spencerfield Farm, which was originally established in 1559 and overlooks the Firth of Forth and the monumental Forth Rail Bridge. Alex Nicol, a former team member at Scottish and Newcastle, Whyte and Mackay, Glenmorangie and Laphroaig distilleries, leads the operation and consulted whisky legend Richard Paterson in creating the blend for Sheep Dip Malt Whisky (Paterson is such an expert that his nose was insured for £7 million).

Sheep Dip Malt Whisky is a vatting of 16 different single malt whiskies from the Lowland, Highland, Speyside and Islay whisky regions of Scotland. Sheep Dip Islay Blended Malt is a quite different than the original Sheep Dip. This peated single malt from Islay, has pure Islay, sweet smoke on the nose, layered with notes of brine, followed by gentle smoke. Winner of the NY, Ultimate Spirit Challenge Chairman’s Recommendation 2015. This whisky was dubbed ‘extraordinary’ with a score of 96/100.

“Roasted peaches & tomato aromas mingle with notes of campfire smoke on the expressive nose. Flavors in the mouth are thoroughly smoky with sweet undertones of sugared grains, creating a pleasant balance that is long lasting.” — Ultimate Spirits Challenge