Size750mL Proof94 (47% ABV)
After 4 years of maturation, Stranahan's Rocky Mountain Single Malt is finished in oloroso sherry barrels from Andalusia, Spain. Having been used for wine maturation for over 40 years, these barrels impart the whiskey with rich vanilla, dark fruit, and oak notes. 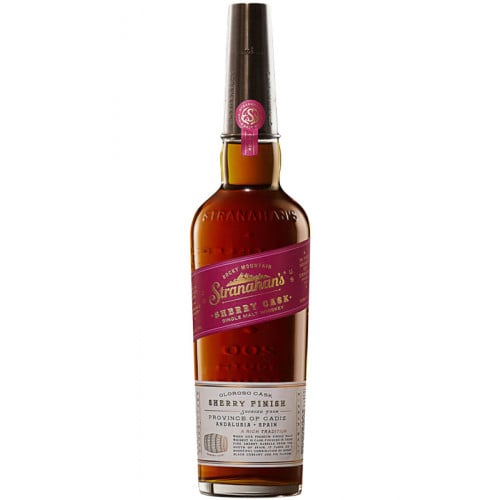 In 1994, volunteer firefighter Jess Graber was dispatched to fight a small fire at the Stranahan Barn just outside Denver. The owner of the barn — George Stranahan — was the founder and owner of Flying Dog Brewery, and eventually struck up a conversation with Graber once the fire had been dealt with. Together, the two teamed up in order to found Stranahan's Distillery, the first legal distillery in Colorado since Prohibition.

Crafted in the heart of Denver, Stranahan's Colorado Whiskey is a testament to the state's Rocky Mountain roots. The whiskey is made exclusively from Rocky Mountain barley, which is malted before being milled, mashed, and fermented at the distillery. Following fermentation, the wash is distilled through a copper pot still before the whiskey is matured in new charred American oak barrels. After the whiskey has matured, it is brought to proof with water sourced from the Eldorado spring, situated just outside Boulder, Colorado. Then, each batch is bottled by hand.

Stranahan's Sherry Cask Single Malt Whiskey is the 11th batch. After 4 years of maturation in new charred oak, their Rocky Mountain Single Malt is transferred into 500-liter oloroso sherry barrels, where it is finished. The casks come from Andalusia, Spain, and have been used for aging wine for more than 40 years, meaning that the barrels impart the whiskey with rich vanilla, caramel, chocolate, dark fruit, and oak notes. The whiskey is bottled at 94 proof.

Get your bottle of this American sherried single malt whiskey today!

The nose opens with cherry, apple, raisin, almond, leather, and hay aromas. On the palate, you'll find hones, cherry, blackcurrant, fig, and hints of brine. The finish is smooth and creamy with caramel, brown sugar, and a touch of smoke.