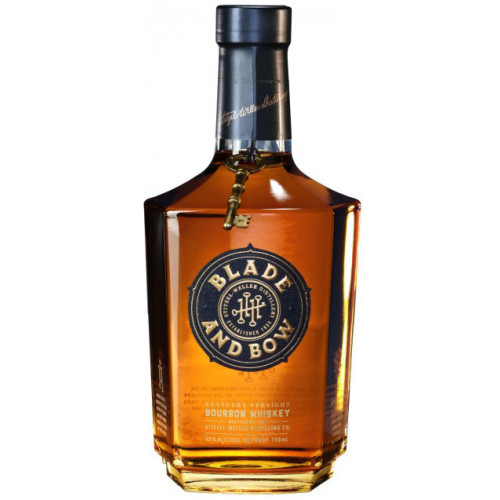 Throughout the Stitzel-Weller Distillery, the “five keys” symbol appears frequently — each key represents a step in the whiskey-making process: grains, yeast, fermentation, distillation and aging. Blade and Bow Kentucky Straight Bourbon Whiskey, one of the first releases in over two decades to utilize actual whiskey distilled at the Stitzel-Weller Distillery, is named after the blade shaft and ornate bow handle that together comprise the two parts of Stitzel-Weller’s iconic skeleton keys.

Blade and Bow Kentucky Straight Bourbon is crafted using a solera-aging, a process typically reserved for aging cognacs, ports and sherries. This is done to preserve the precious original stock of Stitzel-Weller, which is mingled with other fine whiskies during the solera process, during which a series of casks are filled at different intervals over a long period of time (in fact, Blade and Bow Kentucky Straight Bourbon contains the oldest remaining stock of whiskey distilled at Stitzel-Weller, and will be the last available liquid for sale that was distilled at the original distillery).

Blade and Bow Kentucky Straight Bourbon has a restrained nose with hints of citrus, mint, oak and green apple. The palate is slightly fuller, with touches of apricots, figs and pears mixed with cereal grains, and leads to an easy finish with caramel, burnt oak and cinnamon spice.

Blade and Bow Kentucky Straight Bourbon is the final chance to try the last remaining whiskey distilled at the original Stitzel-Weller Distillery.

Blade and Bow celebrates the myth of Stitzel-Weller by reimagining bourbon for the new generations. They offer the last remaining barrels from the historic whiskey maker, showing us once again the true art of bourbon. The name comes from the two parts of a skeleton key that opens the bourbon cathedral: the blade shaft and the ornate bow. There were five keys to the distillery, each representing the five steps of the craft: grains, yeast, fermentation, distillation, and aging.

Restrained nose with hints of citrus, mint, oak and green apple. Palate is slightly fuller, with touches of apricots, figs and pears mixed with cereal grains, and leads to an easy finish with caramel, burnt oak and cinnamon spice.