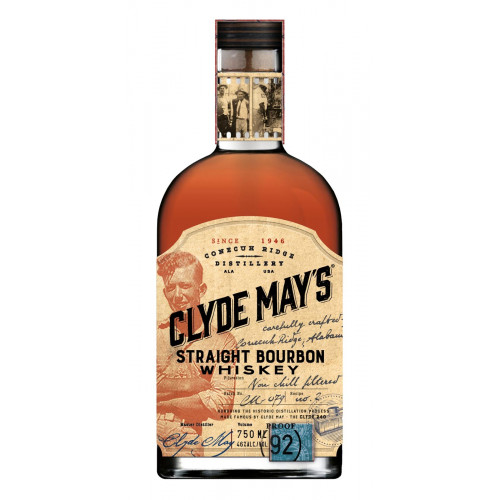 After May's death in 1990, his son, Kenny, took up the family business and began working with Kentucky Bourbon Distillers to produce a whiskey in honor of his father. Clyde May's Straight Bourbon Whiskey is a five-year-old whiskey, aged in heavily “alligator” charred new American oak barrels, non-chilled filtered and bottled at 92 proof.

With a mash bill of 78% corn, 12% rye, and 10% barley, Clyde May's bourbon is a venture away from their traditional, coined and trade-marked Alabama Style whiskey, which has oven-dried apples added to barrels of new-make whiskey. This straight bourbon was first launched in September of 2016, on Clyde May’s birthday and during National Bourbon Heritage Month. The release received a Gold medal in the New York World Wine & Spirits Competition and a 93 rating in the Ultimate Spirits Challenge.

On the nose are aromas of sweet fruit reminiscent of blackberry and peaches with background notes heavy molasses and brown sugar. The palate is smooth with sweet and spicy notes, fruit, and peach cobbler. The finish is long with a medium burn.