This product is available in: CA, CT, IL, NY Unfortunately, we can't ship to PO Boxes and APO addresses.

Size750mL Proof100 (50% ABV)
Named in honor of the founder of modern bourbon, this whiskey earned a score of 95 points at the 2013 Ultimate Spirits Challenge.

This product is available in: CA, CT, IL, NY Unfortunately, we can't ship to PO Boxes and APO addresses. 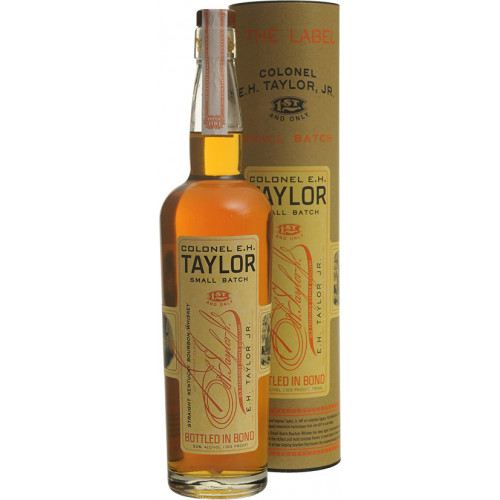 Named in honor of Colonel E.H. Taylor Jr., Colonel E.H. Taylor Jr. Small Batch Bourbon is made from a blend of seven-year old barrels hallowed from the sixth floor of a brick warehouse in Kentucky. Bottled in Bond at 100 proof, the bourbon has distinctive notes of oak and dried fruit. The initially sweet flavors give way to hints of salted caramel, butterscotch and orange, which linger on the finish.

Each bottle of Colonel E.H. Taylor Jr. Small Batch Bourbon is packaged behind a vintage label and canister reminiscent of the bottles Taylor used over one hundred years ago.

Pick up a bottle of history and pay homage to the father of modern bourbon today!

Notes of oak and dried fruit. The initially sweet flavors give way to hints of salted caramel, butterscotch and orange, which linger on the finish.

4.5 out of 5
(10 reviews)
Write a review
Real email address is required to social networks
Sign in
Login with Google
Login with Facebook
Or
We also recommend