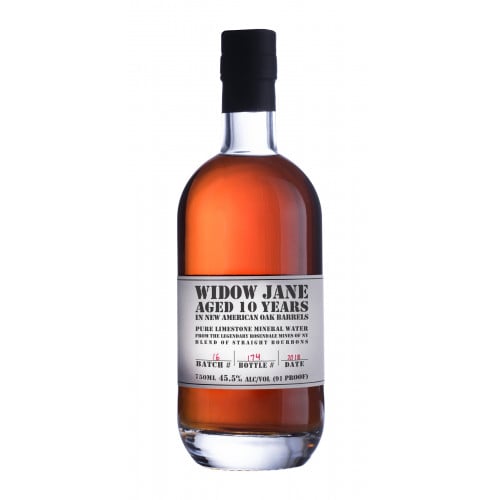 Reviving the lost art of marrying the finest whiskeys, Widow Jane 10 is their signature bourbon. Hand assembled in Brooklyn using the richest & rarest straight bourbons from Kentucky, Tennessee and Indiana, only ever in 5 barrel batches, non-chill filtered and proofed with their own mineral water from the legendary Rosendale Mines of New York.

Widow Jane is all about high-intensity, flavorful and well-aged whiskeys cut with hard, sweet limestone-filtered water that’s known to make great whisk(e)y, from Kentucky to Scotland. Add New York attitude and non-chill filtration to that and you get a whiskey that’s unadulterated and robust in mouthfeel.

When the Widow Jane team set out to produce their own whiskey they wanted to offer something that was flavor forward, bold and rich with character, but most importantly had a taste of New York. All Widow Jane whiskies are proofed with pure limestone water from the legendary Rosendale Mines of NY, just 100 miles north from their home in Red Hook, Brooklyn. It was limestone from this mine which was used to build the foundation of some of New York’s greatest structures: the gargantuan caissons of the Brooklyn Bridge, the Empire State Building and the 27,000 ton pedestal to the Statue of Liberty.

The result is some of the finest aged Bourbon you will find, and a tasting experience complete with beautiful aromas, a smooth and creamy mouthfeel and an ultra-long finish.

Both urban & urbane, Widow Jane is New York’s very own. The signature whiskey of the world’s most magnificent and maddening metropolis.

Pick up your bottle of Widow Jane today!

4.7 out of 5
(8 reviews)
Write a review
Real email address is required to social networks
Sign in
Login with Google
Login with Facebook
Or
We also recommend