Size750mL Proof80 (40% ABV)
Speyburn Bradan Orach is a Gaelic word meaning "Golden Salmon" which many believe to be the best kind of salmon. 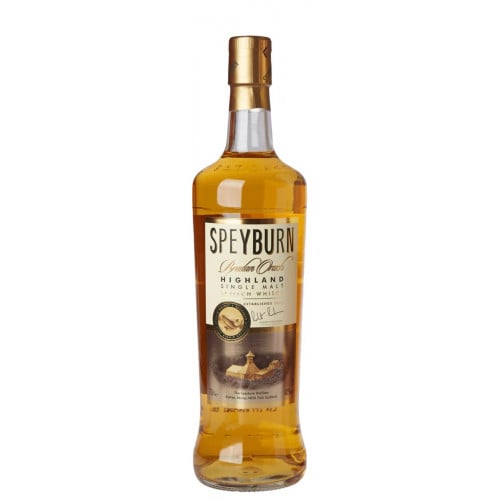 Nearby the River Spey, nestled in a valley at the Northern end of Rothes, sits the Speyburn distillery. In the signature pagoda’d style of Charles Doig, this distillery is one of the most photographed distilleries in Scotland. Speyburn, named after the River Spey, was founded in 1897, by John and Edward Hopkins, two local men with an interest in the industry. That year, which also happened to be Queen Victoria's Diamond Jubilee, seemed the most opportune moment to debut the Speyburn whisky. The first batch was produced just in time for the Queen's Jubilee, and was a great success. The distillery was initially run by the Speyburn-Glenlivet company, who managed operations until 1916 when the distillery was acquired by Distillers Company Limited. Production ceased for a period of time from 1930 to 1934, and again in 1939 for 8 years straight due to WWII.

Speyburn has also lived through a series of acquisitions but continued to stay in production. There’s an instrumental key to Speyburn whiskies; the water. The water sourced for production comes from two local Burns, Broad and Granty, and it is the only distillery in Scotland to source its water from the Granty burn. Despite having only one wash and one spirit still, Speyburn produces an impressive 1.8 million liters a year. They source lightly seated malt for their recipe but used their own drum maltings until 1968.

Speyburn was once known for having the longest fermentation time in the industry. Now shortened to a still lengthy 70 hours (one week), this method imparts a special character to the Speyburn whiskies. Another key factor in the distinct flavor profiles of their whiskies is largely due to a large amount of copper exposure in the stills. This exposure yields a strong fruity profile to the new make spirit.

The whisky is aged in a combination of ex-bourbon and ex-sherry casks, that are stored in tall warehouses. This type of maturation also imparts an extra level of flavor to the Whisky. Bradan Orach is Gaelic meaning Golden Salmon, which many consider to be the best kind of salmon. This Speyburn expression has no age statement, you can expect sweet notes of orchard fruits, citrus, vanilla, and wood.

The nose is fruity, creamy and malty. Notes of orchard fruits, blossom, hints of light citrus also abide here. The palate is a harmonious balance of hefty amounts of vanilla, fruit, spice and oak. The finish is quite long, oak, spice.