Learn more
Size750mL Proof80 (40% ABV) *Please note that the ABV of this bottle may vary
This bright, fresh single malt is the youngest expression in the Glendullan stable, matured for 12 years in a combination of American and European oak casks. 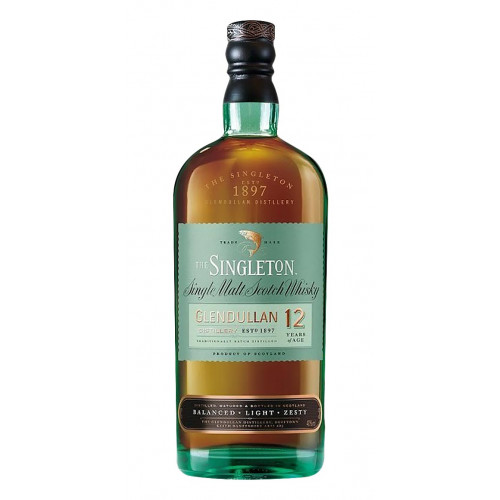 The distillery has three wash stills with an impressive capacity of 33,700 liters, and three spirit stills with 23,800 liters of capacity. They source their unpeated maltings from Diageo's industrial site, and the mashing takes place in a 12-ton mash tun.

The Singleton brand is actually manufactured in three Scottish whisky distilleries; one of which is Glendullan. This 12 Year expression, along with the other expressions from the singleton lineup (a 15 and a 18 year), was released in the US in 2017.

This 12-year-old single malt whisky spends most of its time in American oak casks as well as a small portion of European oak casks to create a more harmonized spirit. The result is a bright, young single malt bursting with fresh fruit aromas, a sweet honeyed palate, and a creamy lingering finish.

Fresh, light and clean the nose with fresh fruitiness and soft, fragrant notes; scented leather, subtle sandalwood, and vanilla. The palate is fresh and easy to drink; spicy, then soft and pleasantly sweet. Fruity, with citrus, raisins, vanilla and a hint of honey. The finish is short, creamy and smooth.