This product is available in: CA, DC, MN, ND Unfortunately, we can't ship to PO Boxes and APO addresses.

Size750mL Proof44.2% ABV
The signature drink of the “Classic Rock Roll Honour Awards", this bold peaty single malt is presented to appeal to both younger and older “rockers,” and was awarded two Gold Medals by the Beverage Testing Institute.

Smokehead has recently changed its designs, and as the original labels are being phased out, there is still a chance that you might receive a bottle different than what is in the picture. Rest assured, the liquid remains the same, regardless of the design.
Notify me when this product is back in stock.

This product is available in: CA, DC, MN, ND Unfortunately, we can't ship to PO Boxes and APO addresses. 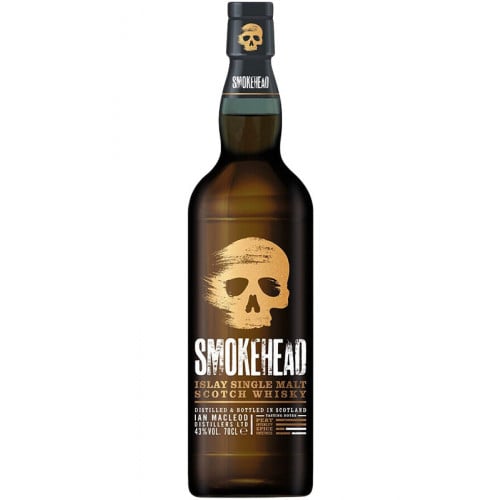 Smokehead Islay Single Malt is a product of Ian Macleod Distillers. First developed and branded in February of 2006, Smokehead is a NAS Whisky from an undisclosed distillery. The bold peaty single malt is presented to appeal to both younger and older “rockers,” and was awarded two Gold Medals by the Beverage Testing Institutes’ in 2009, and was highly acclaimed for its signature smoking skull motif.

In 2007 the Smokehead brand extended their lineup with an Extra Rare release, that included a travel retail exclusive bottling. in October 2008 an 18-year-old Smokehead Extra Black was introduced, an expression that was also available in travel retail and domestic retailers (A new Travel Retail Smokehead Rock Edition II was also released April of 2017).

In 2009 Smokehead became the signature brand of choice for the Classic Rock Roll of Honour Awards as well as the Marshall Ultimate Band Contest. Until 2011 Smokehead was the signature drink for the event which featured rock artists and industry rock legends like Slash, Brian May, Jeff Beck and Gene Simmons.

In 2012 the Smokehead Rock Limited Edition was officially introduced as a special limited edition release, designed to ‘celebrate its credentials as the rock n’ roll spirit of choice’.

The non-age-statement Smokehead single malt has a flavor profile distinctly reminiscent of Ardberg whiskies, with its rich, seaweed and intensely peaty tones. Smokehead has aromas of ‘honeyed raisin scone, dried peaches and medical tinctures with a hint of cedar and mesquite-like smokiness’, with 'good depth and lingering body' and 'subtly complex and earthy smoked wood, leather and a prairie grass driven finish’ (BTI).

The single malt also has notes of sherry, iodine, toffee, smoke and sea salt, and is bottled at 43% ABV.

Pick up a bottle of Smokehead's Islay Single Malt today!

Smokehead is a rich, seaweedy and intensely peaty Islay single malt whisky. With notes of honeyed raisin scone, dried peaches and medical tinctures with a hint of cedar and mesquite-like smokiness. The flavor is fresh, fruity and immense, with notes of sherry, iodine, toffee, smoke and sea salt, subtly complex and earthy smoked wood, leather with a prairie grass driven finish.