Size750mL Proof86 (43% ABV)
This masterfully executed, quintessential whisky malt is a true Highland staple.
Notify me when this product is back in stock. 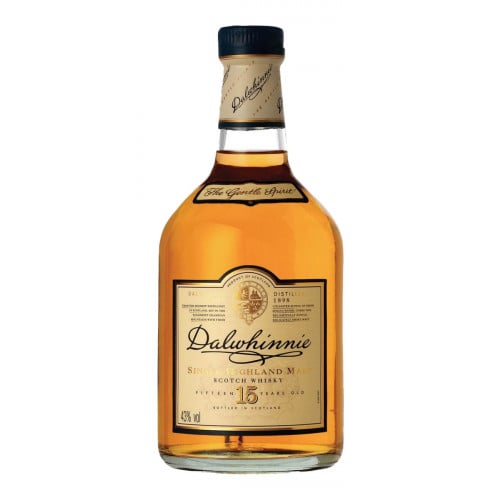 Situated along the Grampian Mountains in the Highlands region of Scotland, Dalwhinnie Distillery was founded in 1897 by John Grant, and was originally named Strathspey Distillery. In 1898, Grant declared bankruptcy and sold the distillery to AP Blyth, who renamed the distillery Dalwhinnie. The name, which roughly translates to "meeting place" in ancient Gaelic, is a reference to the cattle farmers who would pause at Dalwhinnie on their journey south to the cattle markets in Crieff and Falkirk.

Dalwhinnie Single Malt Scotch Whisky is made exclusively from freshly harvested, plump barley, which is milled and mashed with water sourced from Lochan an Doire Uaine (meaning "Loch of the Green Thicket"). The pure spring water, which travels through local peat before reaching the loch (the loch itself is situated 2,000 feet above sea level), imparts a soft yet subtle complexity to the whisky. Since no other distillery may legally use water drawn from Lochan an Doire Uaine, no other distillery is able to replicate the unique, malty-sweet taste of Dalwhinnie Single Malt Scotch Whisky.

After the barley has been milled and mashed, it is fermented in the distillery's original, wooden washbacks. While wooden washbacks are more expensive and difficult to maintain as compared to stainless steel washbacks, they absorb a portion of the heat generated during fermentation, and thus, enable a slower and longer fermentation process. Following fermentation, the wash is distilled twice, first through Dalwhinnie's copper-pot wash still, and then again through its copper-pot spirit still. Aged for 15 years, this classic whisky displays all of the signature Highland qualities of honey and heather.

Bold crisp, dry and very aromatic on the nose, with notes of apples, vanilla, and citrus. The palate is smooth and soft with lingering flavors of heather-honey sweetness, apple peels and vanilla followed by citrus and malt. The finish is lingering, and intense with sweet vanilla, nutty flavors, crisp apples, smoke and malt.