Size750mL Proof92 (46% ABV)
Taste the true character of Campbelltown single malt scotch whisky. Aged for 15 years in the finest American oak barrels and bottled at 92 proof, this splendid sipper delivers a rich nose and a complex palate.
Notify me when this product is back in stock. 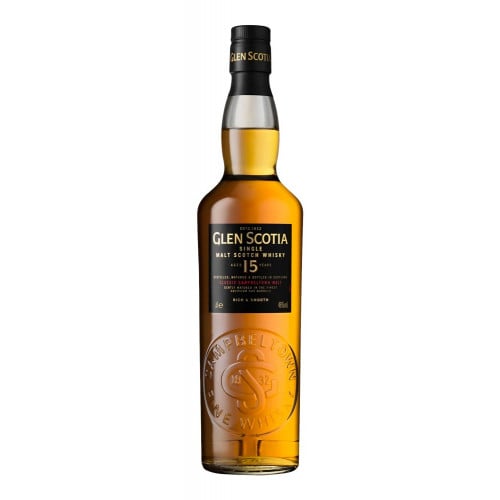 Glen Scotia’s line-up showcases their versatility, as they produced a range of peated and non-peated whiskies, two styles characteristic of Campbelltown, once known as the "whisky making capitol". Their malt is sourced from eastern Scotland, and crafted in open-topped, cast iron mash tuns, and their whiskies are processed with a variation in fermentation time yielding either nuttier, or fruitier malts. Their small-batch distillation process still maintains much of the original equipment designs dating back to the 1830s.

A rich, sweet and deep nose with citrus peels, ginger snap biscuits and fruit aromas that eventually develop into woody notes. The palate is complex with dry notes. A drop of water brings out caramelized and woody flavors. The finish is pleasantly warm and slightly dry.