We're showing you items that ship to MN.

Size750mL Proof100 (50% ABV)
This unique Bruichladdich Islay barley 2011 is an unpeated single malt distilled from barley grown on six western and central Islay farms in 2010.
Notify me when this product is back in stock. 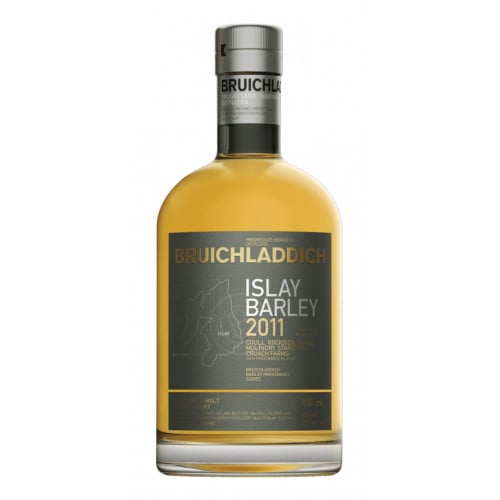 Inspired by an entrepreneurial flair and a youthful enthusiasm, the Harvey brothers began construction of the Bruichladdich (pronounced brook-laddie or broo-lah-dee) Distillery in 1881. Bruichladdich is an award-winning distillery employing generations of distilling knowledge and the principle of minimal intervention. Built in 1881 on the wild Scottish island of Islay, Bruichladdich distillery still uses the original Victorian equipment to create a range of single malt whiskies that are tripple distilled, matured and bottled solely on Islay by a skilled team of 78 men and women.

Bruichladdich’s Islay barley series showcases the phenomenon of “terroir” in single malt whisky – this is the belief that soil, climate, micro-climate, geographic orientation, and local weather systems impact the character, quality and flavor profile of the spirit, delivering a unique expression of “place.” This unique Bruichladdich Islay barley 2011 is an unpeated single malt distilled from Publican and Oxbridge barley grown on six western and central Islay farms in 2010. This release is comprised of unpeated single malt matured in first-fill bourbon, first-fill Rivesaltes wine barrels, and 2nd and 3rd-fill Austrian & Sauternes sweet wine barrels which were married for six months prior to bottling.