Size750mL Proof92 (46% ABV)
Aged in bourbon barrels and finished for one year in Tawny Port casks, this is the first expression from Tomatin to be finished in this variety of wood.
Notify me when this product is back in stock. 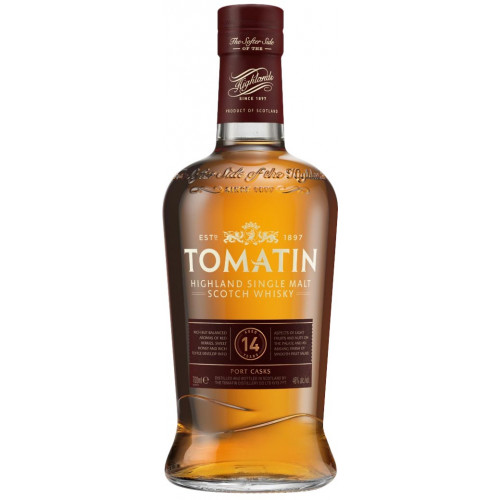 Tomatin 14-Year-Old Single Malt Scotch Whisky is made from plump, Scottish barley. After the barley is harvested, it is mashed and fermented before being distilled twice through Tomatin's copper-pot stills. The stills have a round, flat shape that gives the whisky a rounder and sweeter flavor profile, notes Douglas Campbell, Tomatin's master distiller. Campbell, who began working at the distillery in 1961, joined Tomatin as an accountant, doing clerical work. "After that, the managing director, John McDonald, took me under his wing and gave me the chance to work in different parts of the distillery. I did mashing for three or four years, distilling for a couple of years, worked in the warehouses. Eventually, I was one of the charge hands getting casks ready for dispatch."

Campbell has over fifty years of experience at Tomatin Distillery. "My father worked here as a cooper, my wife worked here for 10 years as secretary for the managing director, and my son works here now in the warehouse. I was born in Tomatin, I belong to Tomatin.” Campbell’s expertise is the foundation of Tomatin Whiskies. The distillery has produced several beautiful whiskies, full of character, including their 14-year-old single malt.

This whisky became a part of the Tomatin stable in 2014. Aged in bourbon barrels and finished for one year in Tawny Port casks (which previously held port for around 50 years), this is the first expression from Tomatin to be aged in this variety of wood. Fruity with a slight nuttiness, this single malt is smooth and sweet. Gold medalist at the 2016 San Francisco WSC and World Whisky Awards, the 14YO also scored 92.5 in Jim Murray’s 2017 Whisky Bible.

Rich but balanced aromas of red berries, sweet honey and rich toffee develop into aspects of light fruits and nuts on the palate and an abiding finish of smooth fruit salad.