Size750mL Proof100 (50% ABV)
Distilled by one of the last independent distilleries in Scotland, this whisky was matured for approximately eight years in traditional oak casks, before being finished in used Port casks. 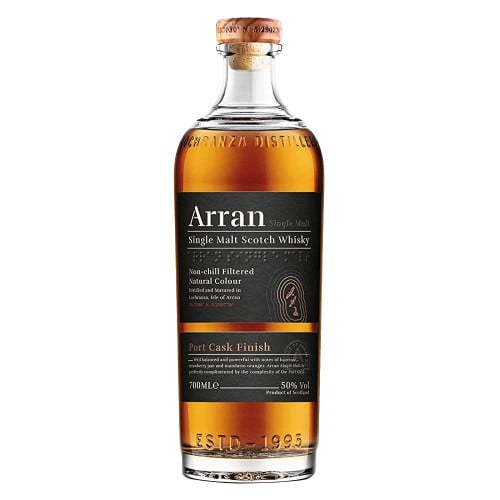 Founded in 1994 by Harold Currie, the Arran Distillery is one of the last remaining independent distilleries in Scotland. "The reason the distillery was built on the Isle of Arran," says James MacTaggart, Arran's master distiller, "was because there is a very good water supply here. In fact, it was tasted and it was decided that it was probably one of the best water supplies in Scotland for making whisky." When the distillery was finally completed in 1995 — construction was halted for nearly a year when a pair of Golden Eagles built their nest near the distillery — it became the first legal distillery on the Isle of Arran in over 150 years.

Arran Single Malt Whisky Port Cask Finish was matured for approximately eight years in traditional oak casks. Following its initial beauty rest, the whisky was finished in used Port casks sourced from Portugal. Much as with Arran Sauternes Cask Finish, the whisky was closely monitored by Arran's master distiller in order to ensure that the whisky was well-balanced yet bold. The whisky has a reddish-bronze color, along with an aroma of red fruits, roasted nuts and vanilla spices. The palate is layered, with touches of fruits and spices complementing notes of cinnamon, apples and raisins, and leading to a sweet, honeyed finish.