Size750mL Proof110.6 (55.3% ABV)
This limited release comes from the shuttered Rosebank Distillery, which Jim Murray declared, “has to be one of the top 10 distilleries in the world.”
Notify me when this product is back in stock. 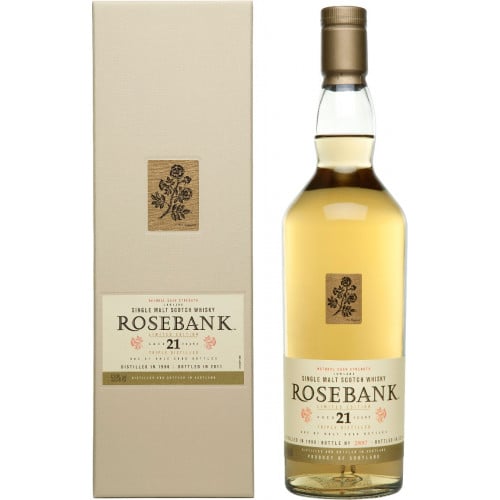 Named for the lush rose petals lining the sides of the Forth-Clyde Canal (between Glasgow and Edinburgh), where the distillery was built in the early 19th century, Rosebank Distillery has been hailed by many as the classic example of a premier Lowlands single malt. In the late 1800s, Rosebank Distillery took over nearby Camelon Distillery, creating a unique and laborious production process for which Rosebank later became known — all of the distillery’s malting was done at the old Camelon site, on the west bank of the canal, after which the malt was transported by way of drawbridge for distilling on the east bank, at the original Rosebank site.

While Rosebank Distillery was lauded for its superior quality, undergoing significant expansion well into the 20th century, eventually the rise of road transport rendered the distillery’s Forth Clyde Canal location a significant inconvenience. As capital costs grew insurmountable, the distillery was mothballed in 1993 and remained shut until the grounds were sold to British Waterways in 2002.

Despite efforts from industry experts such as Jim Murray, who declared that Rosebank Distillery, “has to be one of the top 10 distilleries in the world,” only a handful of rare bottlings continue to be released with the Rosebank name, as distillery’s remaining stock becomes scarcer every year.

Rosebank 21 Year Old Whisky was distilled in 1992, just a year before the distillery’s closing in 1993. The whisky has been aged in refill American oak casks for 21 years and has Rosebank’s signature floral aroma, with pleasant notes of orange, grapefruit and lychee, as well as fresh grass. The palate is filled with marshmallow, fruit cake and even more grapefruit zest, and leads to an outstanding finish complete with oak, vanilla and baking spices.

Only 4,530 of this special release exist — pick up a bottle today!