Size750mL Proof95.6 (47.8% ABV)
This incredibly unique Balvenie release is distilled from dark barley, which is more commonly used in the production of stout.
Notify me when this product is back in stock. 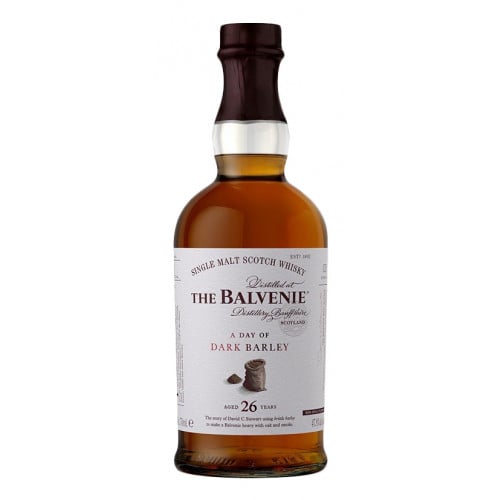 Still owned by William Grant & Sons, The Balvenie has long been a favorite of Speyside Whisky lovers. It’s famous for producing Single Malts in the classic styles of the region — light, fruit-forward, sweet, and clean without a trace of peat smoke. Balvenie took it a bit further, being one of the first to innovate with various double and triple-wood combinations to add complexity. All that adds to a large range of Single Malt agings and wood combinations to entertain the taste buds of fans all over the world.

The arrival of a batch of dark roasted malted barley at The Balvenie distillery marked the beginning of this 26-year long experiment. The dark roasted barley, more commonly used in the production of stout, created a whiskey with an incredibly pleasing depth of complexity. Released as a part of The Balvenie’s “Stories Collection” A Day of Dark Barley delivers a hearty dose of smoke, oak and classic notes of honey, vanilla and citrus flavors.

Big malty notes on the nose, followed by soft brown sugar, vanilla, toffee, blossom honey and mild oaky spiciness. The palate is syrupy with toffee sweetness, and subtle orange peel followed by oak, vanilla and a touch of cinnamon and ginger spices. The finish is lingering with gentle waves of smooth vanilla and oak spice.