Size750mL Proof96 (48% ABV)
The first release in a new annual limited released from the esteemed distillery, The Macallan Edition No. 1 is made from whisky aged in eight different styles of European and American oak casks.
Notify me when this product is back in stock. 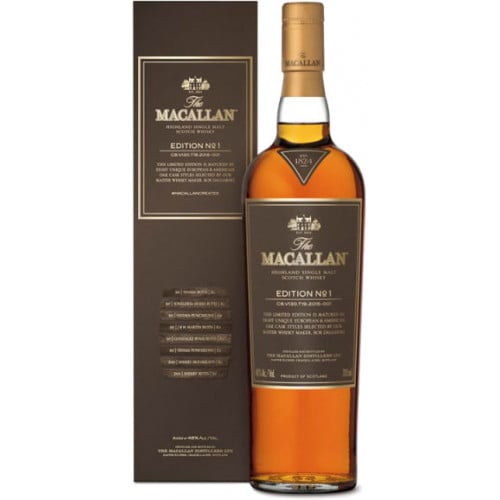 About The Macallan Edition No. 1 Single Malt Scotch Whisky

Macallan Edition No. 1 Highland Single Malt Scotch Whisky is the first release in a new annual limited released from the esteemed distillery. Macallan Edition No. 1 is made from whisky aged in eight different styles of European and American oak casks. Each cask was chosen by The Macallan Master Whisky Maker, Bob Dalgarno, with the idea to create a rich and complex whisky.

As a result of the eight different casks, The Macallan Edition No. 1 has a rich aroma of vanilla and caramel. The palate brings more warmth, spice and complexity, with continued creamy richness throughout, leading to a long and smooth finish filled with cinnamon, allspice and a hint of chocolate.

Pick up a bottle of the newest Macallan today!

Rich aroma of vanilla and caramel. The palate brings more warmth, spice and complexity, with continued creamy richness throughout, leading to a long and smooth finish filled with cinnamon, allspice and a hint of chocolate.