$1,387.99
Caskers Rewards members earn up to 69 store points back when buying this bottle.

Size750mL Proof84 (42% ABV)
Only 3,000 bottles of this single malt, which was matured for a quarter century, have ever been produced. 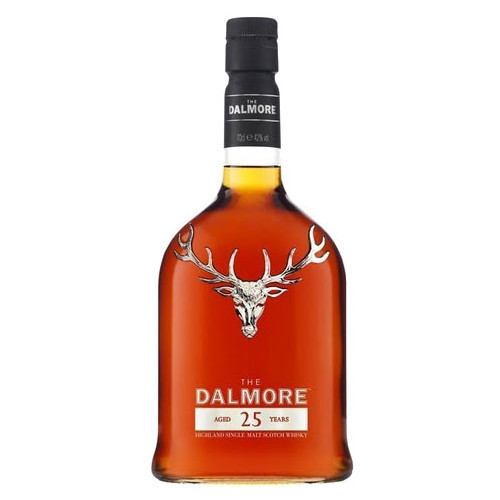 Dalmore Distillery Single Malt Scotch Whisky is made from plump, golden barley sourced from the rich, coastal soils of the Black Isle. Once the barley has been harvested, it is milled and mashed before being fermented with water drawn from the Cromarty Firth. That water, prior to reaching the firth, travels from Loch Morie through a number of peat bogs and limestone quarries, contributing to a slightly mineral and chewy mouthfeel to the whisky.

Following distillation, Dalmore Distillery 25 Year Old Single Malt Scotch Whisky is matured in five unique types of casks. First, the whisky is rested in American white oak barrels. After its initial maturation, a portion of the whisky is matured in 25 year-old Palomino Fino sherry butts while the remainder is matured in first-fill bourbon casks. Then, the fractionated whiskies are married together in bourbon barrels before being finally finished in Tawny Port pipes from Portugal.

As a result of this journey, the whisky has been "gifted a wonderful palate of orange peel, chocolate truffles and spiced gingerbread," says Richard Paterson, Dalmore Distillery's master distiller. "Dalmore Distillery 25 is a truly spectacular addition to Dalmore Distillery Principal Collection, and a must have for fans of the distillery."

Only 3,000 bottles of Dalmore Distillery 25 have been made. Pick one up today!

Aroma of creamy vanilla, marzipan, orange zest and Christmas cake. Notes of rich citrus, peach, mango, orange are complemented by touches of milk chocolate, cloves, ginger and oil. Finish is long and complex, with a touch of tobacco, dates and orange.