Size750mL Proof119 (59.5% ABV)
This exclusive Laphroaig celebrates the Friends of Laphroaig and marks the annual Feis Ile festival on Islay.
Notify me when this product is back in stock. 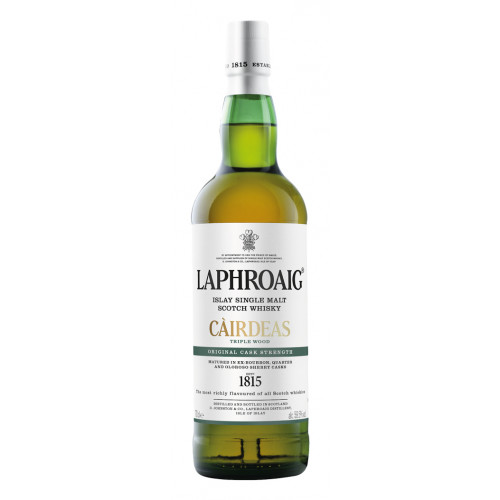 It was through a fortuitous sequence of events that Laphroaig came into existence. In 1815, Donald and Alexander Johnston leased 1,000 acres of land on the island of Islay. Their intent was to raise and sell cattle on the land and as a result, they began growing barley to be used as feed for their livestock. Following a particularly bountiful harvest, the brothers distilled the excess grains they had grown into whisky, and sold it to the inhabitants of the island. Soon thereafter, the brothers found it more profitable to distill whisky than to raise cattle, and Laphroaig (pronounced La-froyg) Distillery was born.

Laphroaig Single Malt Whisky is one of the most flavorful and intense whiskies made anywhere in the world. During Prohibition, it was one of the few whiskies still legally imported into the United States, as it was considered a medicinal spirit. Laphroaig Single Malt is made from the finest Scottish barley, which is malted at the distillery and dried over a peat flame. Unlike other distilleries which source peat from the Scottish mainland, the peat used to smoke Laphroaig barley is made from the heather, mosses and lichens of Islay and adds a distinct iodine-like flavor to the whisky.

Introducing the 2019 annual release of the Càirdeas series, Càirdeas Triple Wood Cask Strength. This exclusive bottling celebrates the Friends of Laphroaig and marks the annual Feis Ile festival on Islay. The unique expression is a special triple maturation, first matured in ex-bourbon barrels, then in quarter casks and finally in European oak casks which previously held Oloroso sherry. It is then barrier filtered and bottled at cask strength to create a punchy dram with Laphroaig’s signature richness of flavor and smoky taste.

Polished leather and tobacco leaves with spicy lemon and clementine zest. On the palate are subtle notes of golden syrup and rich heather honey, with autumn leaves, hazelnuts, vanilla fudge and a touch of white pepper and nutmeg. Dried camomile flowers and a touch of passion fruits. Sweet with rich toffee, with dates, maple syrup, praline and crème caramel. Grilled chestnuts with tarte Tatin, marzipan and strong black pepper. Cedar wood, a touch of furniture polish and beeswax. The finish is sweet, long with caramel and spicy buttery fudge.