Size750mL Proof90 (45% ABV)
This 13-year-old single malt was finished in Marsala wine casks from Sicily after being mellowed in ex-bourbon casks. Glenmorangie's Director of Whisky Creation Dr. Bill Lumsden got the idea for the wintery expression while being snowed in at his home. 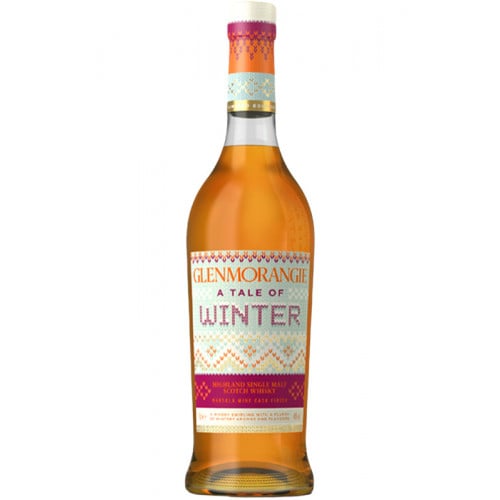 About Glenmorangie A Tale of Winter Single Malt Scotch Whisky

In 1738, a brewery was built upon Morangie Farm in the Highlands region of Scotland. A century later, William Matheson acquired the farm and equipped the Morangie brewery with two stills that he purchased second-hand, and renamed the brewery-converted-distillery Glenmorangie. Their Single Malt Scotch Whisky is made using malted barley, which is mashed and fermented with water sourced from the Tarlogie Spring. The water produced from the spring, which spends nearly a century underground being filtered through layers of limestone before it is extracted, is unusually rich in minerals. In the 1980s, when development in the area threatened the spring's water quality, Glenmorangie purchased 600 acres of land around the spring in order to ensure a consistent and everlasting supply.

After the barley has been fermented, the wash is twice distilled through Glenmorangie's copper-pot stills by a team of 16 distillers known as the Sixteen Men of Tain. Glenmorangie's stills are equipped with relatively small boiler pots, which increases the exposure of the whisky to the copper, resulting in a purer flavor. In addition, the stills are nearly seventeen feet tall — the tallest of any distillery in Scotland — and as a result, produce a lighter, more refined whisky.

Glenmorangie's Director of Whisky Creation Dr. Bill Lumsden got the idea for A Tale of Winter while he was snowed in at his home. Trying to capture the feeling of snugly sitting in front of the fireplace with snow falling outside, he came up with this expression. It's a 13-year-old single malt that was finished in Marsala wine casks from Sicily, Italy. Fruity with hints of cocoa, toffee, cinnamon, ginger, and clove, A Tale of Winter is the embodiment of wintery aromas that is bottled at 92 proof.

Get your bottle of this wintery single malt today!

Aromas of fruit, orange, toffee, lavender honey, and rose greet the nose. The palate is sweet and peppery with a touch of nuttiness, cocoa, red pepper, and barley malt. The finish is long with dark sugar, clove, ginger, and cinnamon.