Learn more
Size750mL Proof105.8 (52.9% ABV) *Please note that the ABV of this bottle may vary
This unique, limited edition whisky was finished for a year in Pinot Noir casks from New Zealand.
Notify me when this product is back in stock. 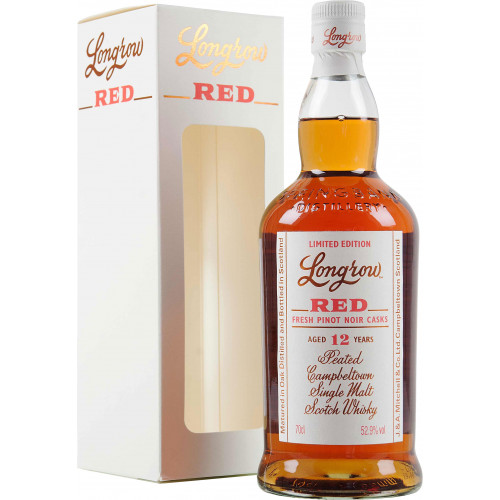 After distillation and an initial aging, Longrow Red Fresh Pinot is matured for its final year in Pinot Noir casks sourced from New Zealand. The fourth edition in the Longrow Red series, this unique single malt is bottled at a cask strength of 52.9% ABV — only 9,000 bottles will ever be made available around the world.

The whiskey’s finishing in Pinot Noir casks contributes an aroma of marmalade, strawberry preserves and orange sherbet, along with scents of pipe tobacco. This aroma gives way to notes of tart berries, toffee and honeycomb, and leads to a finish accented by a deep, musty campfire smoke.

Aroma of marmalade, strawberry preserves and orange sherbet, along with scents of pipe tobacco. This aroma gives way to notes of tart berries, toffee and honeycomb, and leads to a finish accented by a deep, musty campfire smoke.