Learn more
Size750mL Proof92 (46% ABV) *Please note that the ABV of this bottle may vary
Only 2,100 bottles of this single malt, which was matured in virgin oak casks, are available in the United States. 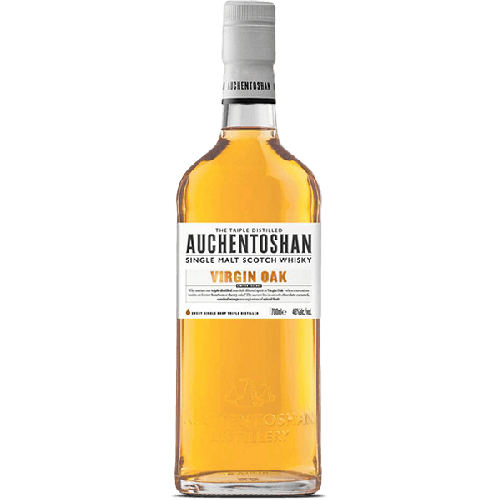 Auchentoshan Virgin Oak Single Malt Scotch Whisky is matured exclusively in newly charred casks crafted from North American oak. While Scotch has traditionally been matured in used sherry, port and bourbon casks, the use of new oak casks to finish whisky is another weapon in a distillery's arsenal and allows the whisky to enjoy the sweeter and more complex flavors of virgin wood. Following maturation, the whisky is bottled without the use of chill filtration or artificial coloring.

The whisky has an aroma of banana custard, creamy vanilla and caramel apples. The aroma gives way to notes of spiced fruits (particularly kiwi, oranges and apples) on the palate, and ends with a touch of spiced pears.

Only 2,100 bottles of this Scotch whisky are available in the United States.


Pick up a bottle of Scotch whose name no one can pronounce today!

Aroma of banana custard, creamy vanilla and caramel apples. Notes of spiced fruits (particularly kiwi, oranges and apples) on the palate. Finish is well-balanced, and ends with a touch of spiced pears.