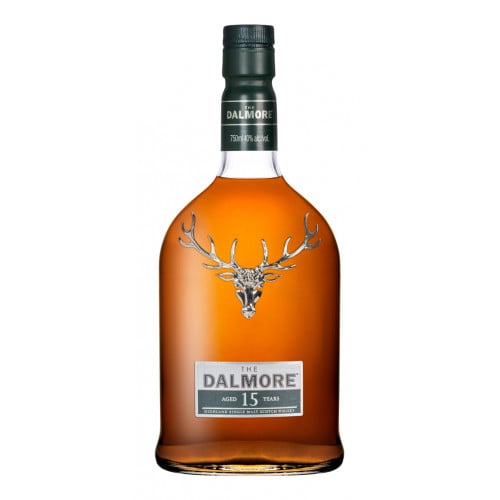 Dalmore Distillery Single Malt Scotch Whisky is made from plump, golden barley sourced from the rich, coastal soils of the Black Isle. Once the barley has been harvested, it is milled and mashed before being fermented with water drawn from the Cromarty Firth. That water, prior to reaching the firth, travels from Loch Morie through a number of peat bogs and limestone quarries, contributing to a slightly mineral and chewy mouthfeel to the whisky.

Dalmore Distillery 15 Year Old Single Malt Scotch Whisky is aged for 12 years in American oak casks that were previously used to mature bourbon. Following its initial beautyrest, the whisky is double-barreled, or finished, for an additional 3 years in three different types of sherry casks: Amoroso, Apostoles and Matusalem Oloroso. This unique quadruple maturation process gives the whisky an aroma of raisins, mandarin oranges, milk chocolate and prunes. The aroma gives way to notes of ginger, espresso beans and coffee cake on the palate. The finish is warming and lush, with hints of vanilla, oak spices, red fruits and green apples.


Pick up a bottle today!