Size750mL Proof80 (40% ABV)
Aged for twelve years, this single malt Scotch whisky scored 95 points at the 2019 Ultimate Spirits Challenge.
Notify me when this product is back in stock. 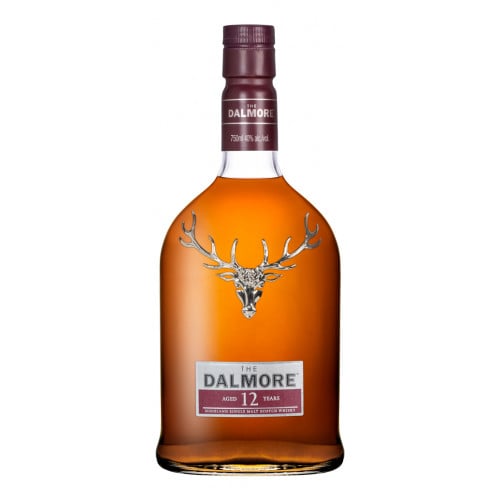 Dalmore Distillery Single Malt Scotch Whisky is made from plump, golden barley sourced from the rich, coastal soils of the Black Isle. Once the barley has been harvested, it is milled and mashed before being fermented with water drawn from the Cromarty Firth. That water, prior to reaching the firth, travels from Loch Morie through a number of peat bogs and limestone quarries, contributing a slightly mineral and chewy mouthfeel to the whisky.

Dalmore Distillery 12 Year Old Single Malt Scotch Whisky is aged for nine years in American oak casks that were previously used to mature bourbon. Following its initial beautyrest, half of the whisky is double-barreled, or finished, for three years in 30 year-old Matusalem oloroso sherry casks (the remainder matures for an additional three years in the bourbon casks). This dual maturation process gives the whisky an aroma of caramelized oranges, apples, plums and marzipan. Notes of citrus, toffee and cinnamon dominate the palate, and are complemented by sweet undertones of vanilla, coffee and cake. The finish is long and sweet, with hints of apricots, cherries and vanilla.

Aroma of citrus fruits, chocolate and aromatic spices. Orange, dried fruits and a hint of vanilla on the palate, followed by roasted coffee and dark chocolate on the finish.