Size750mL Proof80 Proof (40% ABV)
Distilled by the last remaining rum distillery in Guyana, this rum was rated one of the ten best by the New York Times. 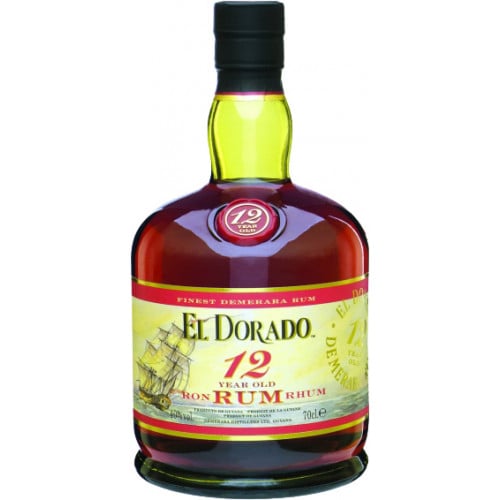 In 1658, Guyana began exporting sugar back to the Netherlands and within a decade, farmer's along the Demerara River began distilling their excess cane sugar into rum. By the turn of the century, the tiny Caribbean country had over 300 unique distilleries. Today, Demerara Distillers Co. — the last remaining rum distillery in the country — pays homage to Guyana's rich tradition of distilling fine rum with El Dorado 12 Year Old Rum.

El Dorado Rum is made from fresh, raw sugar cane cultivated in Guyana's rich, alluvial soil. After the sugar cane has been harvested by hand, it is transported back to Demerara Distillery by barge. There, the molasses is fermented with a proprietary strain of yeast specifically designed to control the Brix of the wash (Brix is the measure of dissolved solids in a solution). Following fermentation, the rum is distilled through Demerara Distillers' antique wooden and copper stills (the stills, which are up two centuries old, were used when the country was still a settlement).

El Dorado 12 Year Old Rum is matured in bespoke, 45-gallon American oak casks for a minimum of twelve years. The hand-coopered barrels are allowed to mature in a custom-built warehouse, where Guyana's intense heat and tropical climate forces the rum and wood to mingle.

Th rum has a smoky, savory aroma, with hints of oak, cinnamon and caramelized oranges. Notes of tropical fruits, banana bread and coconuts dominate the palate, and are complemented by touches of tobacco, cedar and woody spice, and lead to a long, caramel finish. El Dorado 12 Year Old Rum earned the Gold Medal and the title "Best in Class" at the International Wine and Spirits Competition in 2011. In addition, it was named on the "Top 10 List" by the The New York Times.

Smoky, savory aroma, with hints of oak, cinnamon and caramelized oranges. Notes of tropical fruits, banana bread and coconuts that are complemented by touches of tobacco, cedar and woody spice, and lead to a long, caramel finish.