Size750mL Proof70 (35% ABV)
Crafted with 5-year-old column still rums, this expertly-balanced flavored rum was aged in ex-bourbon casks before being infused with locally sourced chocolate and bottled at 70 proof. 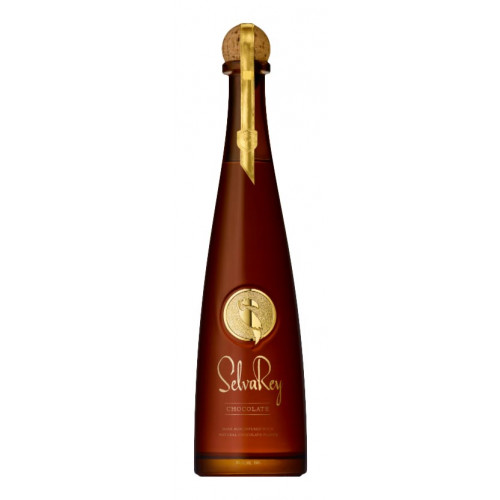 Selvarey Rum was founded in 2014 and is co-owned as well as operated by pop music megastar Bruno Mars, brothers Seth and Marc Gold, and Robert Herzig. With a name that roughly translates to "King of the Jungle", the luxury brand has been taking the world by storm, their 3 core expressions garnering numerous awards. In 2021 the brand has been overhauled with sleek new designs that befit the premium spirit.

Selvarey is a single-estate rum that is produced by legendary Maestro Ronero Don "Pancho" Francisco Fernandez in the Latin American jungles of Panama ― thus the name "King of the Jungle". Each part of the process is meticulously controlled, from the harvesting of the sugarcane, the juice pressing, fermentation, distillation, aging, blending, and bottling. Don Pancho oversees each aspect, ensuring the quality of the product.

The cane enjoys the heat and plenty of rain before being harvested by hand and pressed, with only the first press of the juice being used. The juice is immediately boiled to create the first-grade molasses that serve as the base for their spirits. Using a proprietary yeast strain that is derived from pineapples, the fermentation transforms the sugar into alcohol before the distillation takes place in antique copper column stills from 1922. The rum is aged in casks that are hand-selected from some of the world's finest cooperages.

The Selvarey Cacao Rum is a blend of 5-year-old column still rums that were aged in ex-bourbon American oak casks. The spirit is infused with locally sourced chocolate before being bottled at 70 proof. The flavored rum expression is exquisitely balanced, rich, and complex without the kind of overbearing sweetness that is common in flavored rum.

It's a rich nose with dark cocoa and oak. The palate has a balance of bitter and sweet notes with vanilla, butterscotch, dark chocolate, coffee, and cereal. The sweetness is dialed down perfectly, culminating in a finish with lingering cocoa.