Be the first to review this product
Crafted at the historic Hacienda Santa Ana in Puerto Rico, the Three Stars is a blend of 6 to 10-year-old rums that were aged in ex-sherry American oak barrels.
$56.99
Add to Wish List

The history of Ron del Barrilito begins in 1787 when the Fernández family received a hacienda in Puerto Rico from the Spanish Crown. It was in 1871 that Pedro Fernández returned to Hacienda Santa Ana from France, where he learned about crafting spirits. It would take him nearly a decade to perfect the craft and came up with the process and recipe for Ron del Barrilito or "little barrel rum", thus named for the small barrels that the Hacienda would pour the rum from when serving guests. The recipe remained unchanged for several decades with a younger rum being added after Prohibition ― an expression that was more suited for cocktails.

In 2018 Hacienda Santa Ana launched the first new products in nearly 8 decades ― the limited-edition Four Stars and Five Stars expressions, aged up to 20 and up to 35 years, respectively. They opened a modern visitor center in 2019 and offer tours for rum aficionados from across the globe, letting them experience the beauty of Hacienda Santa Ana.

Ron del Barrilito Three Stars is a blend of rums that have spent 6 to 10 years in American white oak barrels that used to hold sherry. Crafted for sipping, it's a smooth and woody spirit with plenty of dried fruit and tropical fruit notes and a pleasant sweetness that makes it a great choice for cocktails as well.

The nose opens with almond, vanilla, raisin, and banana aromas, as well as plenty of wood notes in the background. Medium-bodied and smooth, the palate has a pleasant fruity sweetness. The finish is subtly smoky and long. 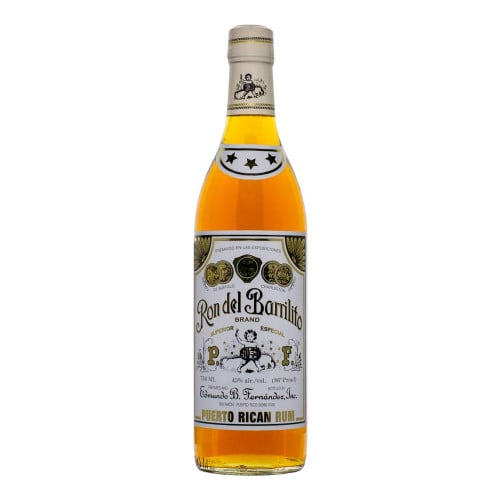