Size750mL Proof80 (40% ABV) - May vary
This is an award-winning ron from Medellin, Colombia. One of the few rums that are aged naturally, it's a blend of the finest Colombian rums that spent 8 to 12 years in American oak casks at 5,000 feet.
Notify me when this product is back in stock. 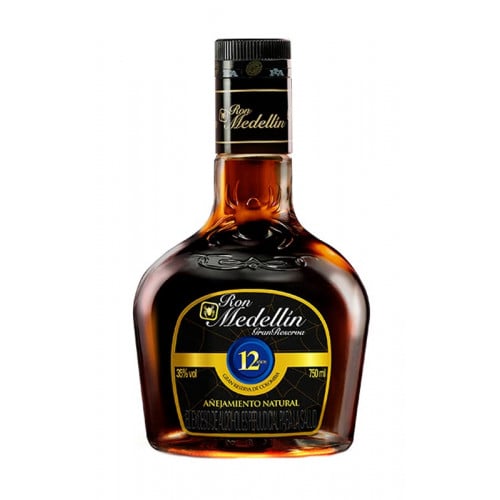 Established in 1920 in Medellin, the second largest city of Colombia, La Fabrica de Licores y Alcoholes de Antioquia (FLA) was producing 6,000 bottles of fine spirits per day by 1936. In 1968, the new plant of the Antioquia Liquor and Alcohol Factory, which would later become the distillery as we know it today, was built. Undergoing many renovations throughout the years, including the construction of three honey tanks that have become symbols of FLA, today, FLA is a modern, state-of-the-art facility, famous for its Antiqueño Brandy and Medellin Rum.

The word ron signifies a Spanish-style rum. Reaching the land of America, ron traveled across the Pacific Ocean and it was immediately adored in Colombia, where they quickly mastered the art of ron-making. In 1946, it was David Cadavid Gónima who came up with the idea to begin producing ron at the Antioquia Liquor Factory. Named Ron Medellin, there are decades of experience behind this award-winning ron brand that has garnered wide critical acclaim and international success over the years.

The award-winning Ron Medellin Gran Reserva 12 Años is a blend of the finest Colombian rums that were aged naturally in American oak barrels between 8 and 12 years at 5,000 feet above sea level. Only the finest sugar cane is selected from various regions of Colombia and the long maturation period in noble wood smoothens out the flavor of this exquisite expression, while the low temperatures reduce the angel's share. This is a complex, smoky and smooth rum with a unique character. While the flavor profile is complex enough to stand beautifully on its own, it's also perfect as a cocktail base.

Get your naturally-aged Colombian rum today!

Distinct dark brown hue. The nose is very vanilla-forward with floral and spicy notes prevailing, accompanied by aromas of wood, fruits and almonds. The palate is sweet and astringent with notes of vanilla, oak and spices. The finish is long, complex and warm.