Size750mL Proof80 (40% ABV)
Clément VSOP is aged rum made from sugarcane juice in Martinique. It is aged a minimum of four years in virgin Limousin barriques and re-charred Bourbon casks, and bottled at 40% ABV.
Notify me when this product is back in stock. 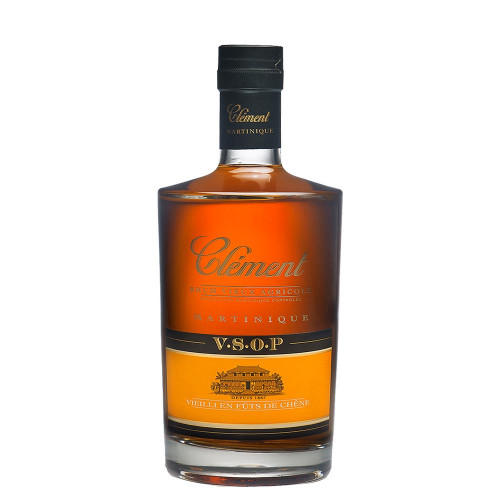 The year was 1887 and the sugar industry crisis in the Caribbean was at its peak when Homère Clément purchased Domaine de l'Acajou, a 43-hectare sugarcane plantation in the Martiniquean town of Le François. Homère Clément was a prominent member of his community, a doctor and politician. When he bought the plantation, the production of sugar from sugar beet in Europe had been developing rapidly for several decades, delivering a severe blow to Caribbean economies, which depended heavily on producing sugar from sugarcane by that time. Clément saw the solution for the island’s ailing economy in rhum agricole (agricultural rum), a French style of rum that is made from freshly-pressed sugarcane juice instead of molasses that are typically used to produce Spanish and English style rums. He started producing rum with the techniques used to make brandy in France’s Armagnac and Cognac regions, except that he used a copper column rather than a copper pot still. With his innovative thinking and the influence that he had as the deputy for Martinique between 1902 and 1906, Clément managed to turn the sugar crisis into a new opportunity that pulled the island out of its depression, and his pioneering role in the industry earned him the nickname of the godfather of rhum agricole.

In 1917, Homère Clément opened a distillery called Habitation Clément to meet the growing demand. After his death in 1923, the business was taken over by his son Charles Clément, who studied distillation at the famous Louis Pasteur School in France and perfected his family’s method of rum’s production. In 1940 he created the brand Clément. In 1986, Groupe Bernard Hayot bought Rhum Clément from Charles’s sons George and Jean-Louis-José Clément. Remaining close to the Clément family, the Hayot family carries on the Clément legacy, combining tradition and innovation. Habitation Clément is a registered French historical landmark, where visitors can also learn about Caribbean history, art and culture.

Clément VSOP is aged rum made from sugarcane juice in Martinique. Clément VSOP is aged a minimum of four years in virgin Limousin barriques and re-charred Bourbon casks, carefully selected by the Cellar Master. This elegant, mahogany colored rum is bottled at 40% ABV.

Notes of caramel, exotic spice and dried fruit on the nose lead to a soft, silky entry, and palate full of coconut, banana, crème brûlée, nuts and dried fruit. The finish is long and smooth, with tones of charred sugarcane, custard and peppery spices.