Learn more
Size750mL Proof82.2 (41.4% ABV) *Please note that the ABV of this bottle may vary
Aged for 43 years in just two American ex-bourbon casks, this single malt whisky is the oldest vintage in Balblair's U.S. range.
Notify me when this product is back in stock. 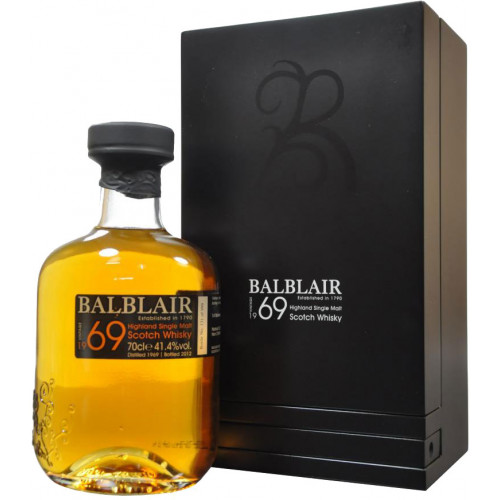 Balblair Single Malt Scotch Whisky is made from plump, ripe Scottish barley, which is malted and fermented using water from the same source the Ross Family began using nearly 225 years ago. Following fermentation, the grains are twice distilled through the Balblair's copper-pot stills. After distillation, Balblair's stillmen remove the heads and tails of the distillate and preserve only the "hearts"for maturation (the hearts comprise less than 20% of the entire distillate).

Balblair 1969 Single Malt Scotch Whisky was distilled in 1969 and aged for 43 years in American ex-bourbon hogshead casks, before being bottled at natural strength in 2012. The 1969 vintage is the oldest in Balblair’s entire U.S. portfolio, and extremely-limited due to the fact that only two casks were used to produce the entire release.

Balblair 1969 Single Malt Scotch Whisky has a rich amber color, along with an aromatic nose filled with apples, pears, bananas and a hint of vanilla. The aroma gives way to notes of honey, toffee and tropical fruits, and leads to a long, full-bodied finish.

Pick up a bottle of this extremely limited whisky today!

Balblair, founded in 1790 by John Ross, is one of the oldest distilleries in Scotland. The distillery was operated by the Ross family until the late 19th century, when James Ross gave up the tenancy of Balblair to Alexander Cowan, a wine merchant from Inverness. In 1911, Balblair ceased its distilling operations, and in 1932 the last whisky from the era was bottled. In 1948, Balblair resumed production under the stewardship of Robert James "Bertie" Cumming, a solicitor from Banff, who purchased the distillery for £48,000 a year later. In 1970, he sold the company to Hiram Walker, and throughout the 1980s extensive investments were made in the development of the distillery’s facilities. The distillery, located in the Highland village of Edderton, was acquired by Inver House Distillers in 1996.
Explore all Balblair bottles >>

Rich amber color, along with an aromatic nose filled with apples, pears, bananas and a hint of vanilla. Aroma gives way to notes of honey, toffee and tropical fruits, and leads to a long, full-bodied finish.