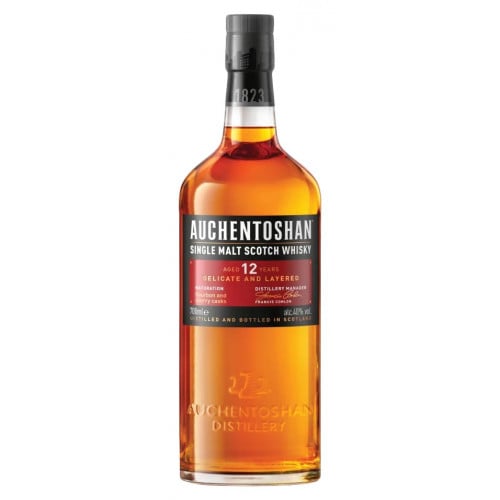 Situated at the foot of the Kilpatrick Hills in Western Scotland, Auchentoshan (pronounced Aw-khen-tosh-an) Distillery was founded in 1800 and is one of the last remaining Lowland malt whisky distilleries. The distillery is nicknamed "Glasgow's Malt Whisky" due to its proximity to Glasgow, and its whisky is nicknamed "breakfast whisky" due to its sweet flavor and elegant texture.

Auchentoshan Single Malt Scotch Whisky is made from malted, optic barley that is gently kilned and completely unpeated. The barley is milled and mashed before being fermented in wooden washbacks made from Oregon Pine. The wooden washbacks (as opposed to the stainless steel washbacks used at most distilleries) retain a portion of the heat produced during fermentation, and ultimately produce a lighter and slightly sweeter whisky.

While Scotch whisky is traditionally distilled twice, Auchentoshan Single Malt Scotch is copper-pot distilled three times — first through a wash still, then through an intermediate still, and finally, through a spirit still. This extra step during distillation — no other major distillery uses an intermediate still — is both time-consuming and expensive, but it produces a 160-proof Whisky that is incredibly pure and free of impurities.

After the third distillation, the Auchentoshan 12 Year Old Single Malt Scotch Whisky expression is brought down to barrel proof before being matured for a minimum of 12 years, mostly in ex-bourbon barrels and a small portion of sherry casks. Bottled at 80 proof, it's a lovely Lowland single malt with aromas of toasted almonds and caramelised toffee that showcases Auchentoshan's signature lightness and delicate taste.

The nose opens with creme brulee, citrus, toasted almonds, and pleasant, delicate green notes. There's orange zest and citrus on the smooth palate with a hint of ginger and a subtle sweetness. Finishes slightly dry and nutty with a toffee note.