This product is available in: CA, CT, NJ, NY Unfortunately, we can't ship to PO Boxes and APO addresses.

Size750mL Proof96 (48% ABV)
Crafted to celebrate the distillery's founding over two centuries ago, this single malt earned a score of 92 points from Wine Enthusiast.

This product is available in: CA, CT, NJ, NY Unfortunately, we can't ship to PO Boxes and APO addresses. 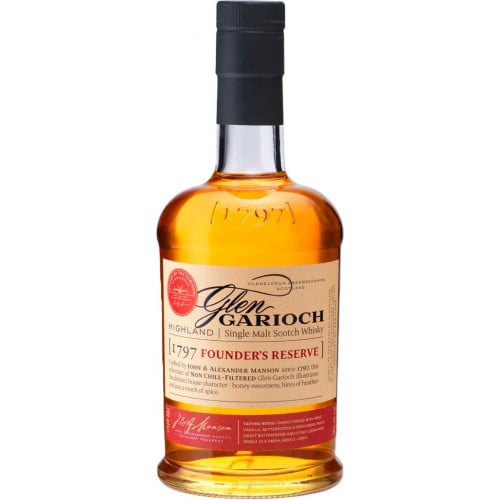 Situated in the village of Old Meldrum in the Scottish Highlands, the Glen Garioch (pronounced Glen Geery) Distillery was founded in 1797 by John and Alexander Manson. The distillery is one of the oldest in Scotland, and takes its name from the Valley of the Garioch, which is situated adjacent to the distillery and is known for producing the finest barley in all of Scotland. The distillery — the most easterly in Scotland — enjoys the temperate climate and cool breeze that are ideal for the production and maturation of whisky.

Glen Garioch Single Malt Scotch Whisky is made from barley harvested from the Valley of the Garioch. After the barley has been harvested, it is mashed and fermented with water drawn from the Silent Spring. In 1968, production of whisky at Glen Garioch Distillery was suspended as the area surrounding the distillery experienced a severe drought. Four years later, an incredibly pure spring was discovered upon a neighboring farm. The Silent Spring, as it came to be known, could neither be seen nor heard without modern instruments, and has been Glen Garioch's water source for over four decades. Once the barley has been fermented, it is distilled twice — first through Glen Garioch copper-pot wash still and then again through its spirit still.

Glen Garioch 1797 Founder's Reserve Single Malt Scotch Whisky was crafted to celebrate the Manson Brothers, who founded the distillery over two centuries ago. The whisky has a copper-golden hue, along with an aroma of vanilla, dried apples, pears and bright citrus. Notes of dried fruits dominate the palate, and are complemented by touches of ginger, raisins and cinnamon. The finish is sweet and flavorful, with hints of cedar, oak and cloves.

Glen Garioch Founder's Reserve Single Malt earned the Double Gold Medal at the San Francisco World Spirits Competition in 2011 and 2012, and a score of 92 points from Wine Enthusiast Magazine.

Copper hue. Aroma of vanilla, dried apples, pears and bright citrus. Notes of dried fruits dominate the palate, and are complemented by touches of ginger, raisins and cinnamon. Finish is sweet and flavorful, with hints of cedar, oak and cloves.