Learn more
Size750mL Proof86 (43% ABV) *Please note that the ABV of this bottle may vary
Highland Park’s uncompromising approach to making single malt Scotch whisky shines through in the rich malty tones and legendary aromatic smoke of this 12 YEAR OLD.

Dubbed "the greatest all rounder" by renowned whisky expert, Michael Jackson for striking the perfect balance of smoky and sweet, this whisky is matured for 12 years in the distillery's signature sherry-seasoned European and American oak casks on the wild and remote Orkney Islands. 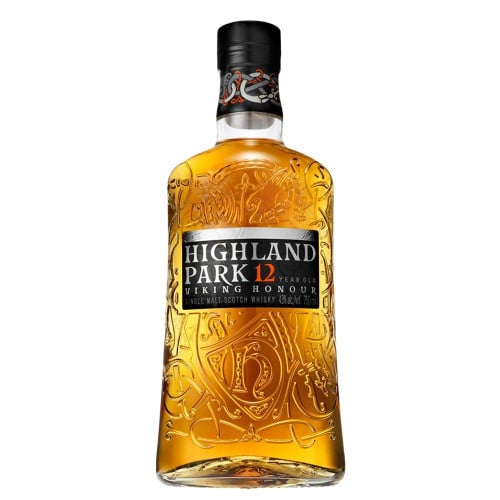 For centuries, Highland Park has produced single malt Scotch whiskies that are uncompromising in their pursuit of a perfect balance — and the 12 Year Old is perhaps the best known expression of that perfection. Rich, malty tones meld with the subtle floral smoke of Orcadian peat, aged exclusively in sherry-seasoned European and American oak casks.

Discover an unmatched balance of smoky and sweet: discover the Highland Park 12 Year Old VIKING HONOUR. With is naturally cask driven color, crafted with no additives, this fine whisky received the Tried & True Award, 96/100- Great Value, as a finalist at the Ultimate Spirits Challenge 2019 and a Gold Medal at The Fifty Best Single Malt Scotch Whisky Awards, 2018. Pair this exquisite whisky with haunch of venison, chocolate ginger biscuits, soft cheeses such as French Brie and even Japanese sushi and wasabi (yes, really!)