This product is available in: IL, KY, NJ Unfortunately, we can't ship to PO Boxes and APO addresses.

Size750mL Proof92 (46% ABV)
It’s peat that takes center stage in this Speyside single malt. With secondary notes of fruit and oaky tannins, this smoky maverick won Silver medal at the 2017 International Wine & Spirit Competition.
Notify me when this product is back in stock.

This product is available in: IL, KY, NJ Unfortunately, we can't ship to PO Boxes and APO addresses. 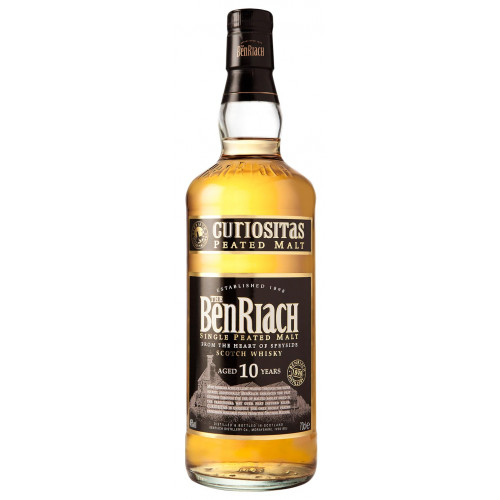 But the 1960s were good to BenRiach as well as the entire industry, and the facility remained operational from 1965 onwards. In 2004 the distillery was bought out by a private entity who released a true BenRiach single malt Whisky. The distillery eventually fell under the ownership of The BenRiach Distilling Co. which also took (befittingly) the Glendronach and Glenglassaugh distilleries under its umbrella.

BenRiach Curiositas is crafted using a heavily peated malted barley. This hearty dose of smoke is quite a rarity in the modern day Speyside heartlands, whose single malts are characterized by their unpeated, fruit-laden flavor profiles. But this was not always the case, as the original Speyside character and flavor of malts typical of the nineteenth century, tended to lean towards the peaty side, as did all Scotch Whiskies of the times. Peat reek is this Curositas’ main act, prominently featured in the fore whilst, the fruited notes fill the background, and oaky notes linger on the finish.

It is said that 10 is the magic number when it comes to aging peated single malts. After 10 years of maturation, the Whisky achieves an optimum balance of peat-bittersweet and oak infusion. Curiositas is a distinctive dram, in so many ways. Full of character and depth, this single malt has quite a mature demeanor for a Whisky of its age. The expression also took Silver at the International Wine & Spirit Competition 2017.

An explosion of aromatic peat reek, with fragrant hints of honey, fruit and mellow oak on the nose. The palate is an avalanche of peat, followed by an extravagant and complex mix of fruit, heather, nuts, oak wood and spices.