Learn more
Size750mL Proof92 (46% ABV) *Please note that the ABV of this bottle may vary
This limited edition Johnnie Walker blend was aged for at least 10 years in ex-bourbon barrels before being finished for one month in ex-rye casks.
Notify me when this product is back in stock. 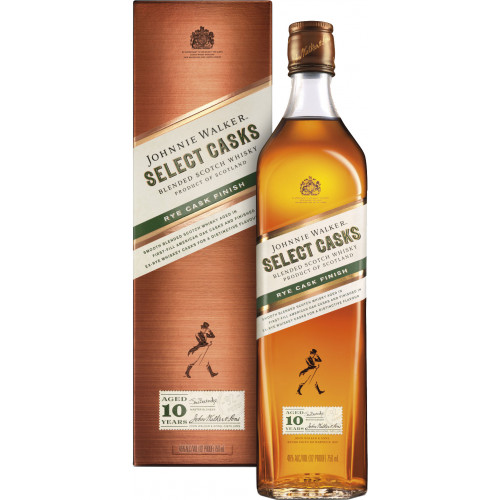 Inspired by this tradition, Johnnie Walker has unveiled a new “Select Cask” series, in which Johnnie Walker Select Casks Rye Cask Finish Whisky is the inaugural release. The blend itself is dominated by a Cardhu malt, which is expertly married with several other grain whiskies, and is aged for a minimum of 10 years in ex-bourbon barrels. After this initial beautyrest, it is finished in ex-rye casks for approximately one month before bottling.

As a result of this unique finishing process, Johnnie Walker Select Casks Rye Cask Finish Whisky has a smoky nose of burnt marshmallows and graham crackers, which leads to a bold palate filled with notes of dark chocolate, cinnamon, raisin and toasted oak. The finish is exceptionally smooth and bursting with spice.

“We have a team of 13 blenders experimenting with different whiskies,” says Brian Cox, marketing manager for the Johnnie Walker portfolio. “Some experiments, like Double Black, turn out to be very much in the house style and available in enough quantity that we can make them permanent parts of the portfolio. Some are more finite by nature, involving research to learn more about different flavor profiles, aging techniques, and so on. Rye Cask Finish is one of the latter.”

Smoky nose of burnt marshmallows and graham crackers, which leads to a bold palate filled with notes of dark chocolate, cinnamon, raisin and toasted oak. Finish is exceptionally smooth and bursting with spice.