Size750mL Proof107.6 (53.8% ABV)
The 2019 edition of Ardbeg's revered Supernova limited edition single malt crowns the series with its (and Ardbeg's in general!) peatiest expression yet.
Notify me when this product is back in stock. 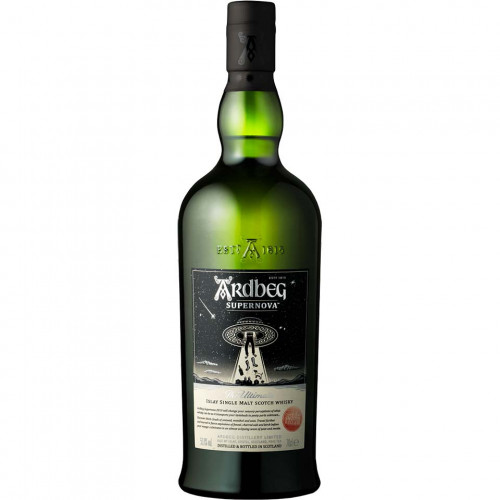 In 2011, Ardbeg Distillery sent a special batch of whisky into orbit in order to study the effects of whisky maturation in space. Since its initial launch, this cosmic whisky had been orbiting the planet at 17,227 miles per hour, 15 times per day inside the International Space Station. In late 2014, the whisky entered the earth's atmosphere once again, and to commemorate the successful completion of Ardbeg’s space journey, for the first time in nearly five years, Ardbeg released a new, limited edition bottling of its famous Adrbeg Supernova release.

The following year's release was supposed to be its final, but has been revived last year due to popular demand. This fifth entry in the peatiest series by Ardbeg has the highest PPM (phenol parts per million) yet. The 2019 edition of the Ardbeg Supernova Single Malt Scotch Whisky is made from 100% malted barley, matured in ex-bourbon casks and bears no age statement. It's non-chill filtered and bottled at cask strength. "A heavily peated Ardbeg of stellar proportions, this dram is an abduction of the senses," say Ardbeg of this year's edition.

Get a bottle of this limited and out-of-this-world peat bomb today!

The nose is rich with spice, aniseed, and menthol. A fruity sweetness balances it with notes of apple, and citrus. There's lots of the earthy peat that Ardbeg is famous for, and a touch of brine rounds it off. The palate balances peaty and smoky notes with the fruitier side of things and brings notes of bonfire smoke, soot, and charred oak. A peppery spice is present, along with notes of caramel, orange, and menthol. Finishes long and dry with heaps of smoke, spice, and fruit.