Learn more
Size750mL Proof105.8 (52.9% ABV) *Please note that the ABV of this bottle may vary
After THE DARK comes… THE LIGHT. This stunning, double-gold medal winning 17 Year Old is a celebration of the spirit of renewal. THE LIGHT is inspired by the spring and summer months on Orkney; a time to emerge from winter’s hibernation and embrace the long beautiful days ahead. 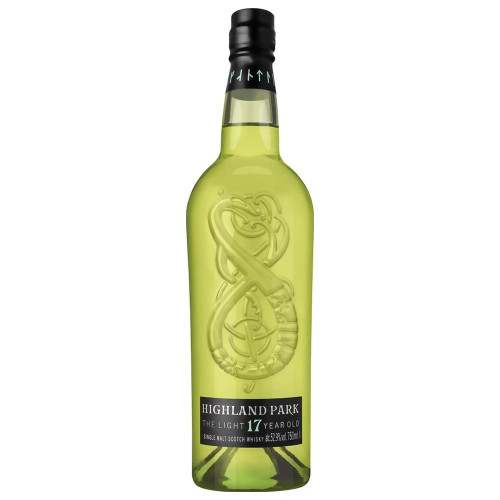 Highland Park’s “The LIGHT” is the second release of their two-part series celebrating the Orkney climate and the distinctive influence it has on its whiskies. Deeply contrasting "The DARK," "The LIGHT" celebrates the spirit of renewal and the refreshing beauty of Orkney spring and summer months. Matured exclusively in American sherry oak casks it highlights the bright and fruity side of the legendary Highland Park spirit with flavors of creamy vanilla, baked pear, and nutmeg that meld luxuriously with rich aromatic smoke. Bottled in a beautifully embossed green glass vial, its serpent dragon design is inspired by the great Norse sagas, embracing both the high sun of the summer solstice and the low sun of the winter solstice. This stunningly vibrant single malt earned a Double Gold medal at the 2018 San Francisco World Spirits Competition.